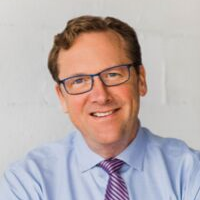 Ken Mayhew is the chair-elect of AFP Canada, the chair of the AFP Canada Communications Committee and the former chair of AFP Greater Toronto Chapter. From 1991 to 2002, he worked with the MS Society of Canada, eventually becoming chief development officer. From there, he went to be President and CEO at the William Osler Health System Foundation in Brampton, Ontario, where he has worked for almost nine years. Ken has been involved with AFP through much of that time, contributing to the founding of AFP Canada, as well as the lives of many individual fundraisers. The following Q&A is taken from a speech he delivered upon receiving the Outstanding Fundraising Professional Award from the Greater Toronto Chapter in November 2019.

Ken, you recently received the AFP Greater Toronto Chapter’s Outstanding Fundraising Professional Award. What was it like to receive the award from your peers?

I am deeply humbled and grateful for this recognition. I have a profound belief in the importance of AFP. The friends and mentors and reverse mentors I have met have pushed me to be a better practitioner and person [as well as] providing a degree of insulation against the inevitable ups and downs and doubts that come with doing anything that matters.

What contribution do you think AFP makes in the world of philanthropy?

Through this and other incredible chapters and AFP’s Foundation, a New Narrative [has been] developed by AFP Canada for our sector with clear evidence that fundraising is critical to Canada. Canadian charities cannot change the world unless they have the money to do it. The whole point of fundraising is to make sure charities have enough money to be able to provide life-changing services for their beneficiaries. Donors give more often and give more when asked and that is what fundraisers do every day.

I began at the MS Society as a part time Read-A-Thon event coordinator. I later found out that the person they [initially] offered the role to declined. On my first day, I found out that the person who had hired me had been let go. Also as many new staff do, within the first few weeks I decided that senior management had no clue what was really going on. Over time my opinion on that topic has of course changed but, if you ask my team on certain days, that perception has not.

What were some of the early the lessons you garnered from your work with MS?

I witnessed fear and loss and was struck by how random the whole thing was. I met people who, through no fault of their own, woke up one day with multiple sclerosis—a chronic, often progressive neurological disease. With no treatments available at the time, I learned that life is not always fair nor explicable. To this day, when the clouds gather and the path is not clear, I draw on the courage and character of those strangers who became such dear friends, my heroes and role models.

After a few months of cold-calling schools and conducting assemblies for school children as an MS Read-A-Thon event coordinator—and somewhere between the sketchy Motel 6 in Wawa and the school assemblies in Moose Factory and Moosonee—I fell in love with fundraising. It was difficult work, but it provided such purpose to the children I spoke to who often lived with a parent who had MS, to the cause of literacy and to me.

You ended up spending 20 years with the MS Society. Could you sum up how that went for you?

Twenty years flew past, and our incredible teams developed and rolled out the national MS Walk and MS Bike programs, which are sector benchmarks to this day. I am proud about how many of those fun “yes-we-can” idealists now hold very senior positions in our sector. I was also given the opportunity to build and work with campaign cabinets from Halifax to Vancouver, and to watch exceptional women and men bring a national research training network to reality. I also witnessed Canadian researchers, including many at Sick Kids and St. Michael’s Hospital, develop treatments that today have made MS a largely treatable disease. I lost dear friends to MS, but also witnessed firsthand the hope made possible through philanthropy.

What made you decide to leave the MS Society?

It was not easy to move on, but I was very fortunate to be given an opportunity by the chair of the William Osler Foundation Board—at the time Kulvir Singh Gill—to join and lead the team at the William Osler Foundation. I was tasked with raising funds for multiple and concurrent redevelopment projects in Brampton and North Etobicoke. My mom’s life had been saved in a community hospital when I was in high school with three younger siblings, including a six-year-old brother, so I was well aware that you never need a community hospital until you do.

You’ve been with the William Osler Foundation for more than eight years now. How has that gone so far?

Working at William Osler began a chapter of growth for me. I learned from community leaders with very different perspectives and lived experiences than mine. At Osler, the majority of our population identify as visible minorities and hail from every part of the world. Many do not adhere to the Judeo-Christian notion of philanthropy, yet I find their desire to serve to be limitless. I can say without hesitation that working with, and learning from, the many communities within Osler, alongside extraordinary leaders of all backgrounds, has been the most fulfilling part of my job.

And just last Saturday at our Osler gala, we heard the story of a man taken to Etobicoke General Hospital only four days after we opened our new patient tower. He had a ruptured aortic aneurism, which is generally fatal. Thanks to the new ultrasound and equipment, his ER doctor saved his life. And over 9,000 donors from a community with a 25 percent poverty rate saved his life. Last Saturday Osler’s gala raised more than $2.2 million. It was a night to remember.

What, in particular, appeals to you about your current work?

I have been deeply moved by someone stepping forward with generosity at a level that you know is a stretch for them, or when a corporation ties their brand and reputation to your cause. Thanks to fundraising, many [people] are fed and housed, once terminal diseases are now treatable, new Canadians are being given a future through education, and social justice issues, once considered “just the way that it is,” are being confronted and challenged. Change is being funded by philanthropy and through exceptional fundraisers.

What happens when things don’t go well in fundraising, when people aren’t donating. How can you cope with that?

This job can also feel quite lonely—when the tickets don’t sell, the response rate tanks, the campaign you put your heart into generates no lift, or when the ‘make or break’ loyal donor you ‘really connected with’ suddenly stops returning your calls. This is the moment when living a life of intention collides with KPIs and dashboards. Did you work any less hard or with any less intensity than the day the big gift arrived? I do not know a single fundraiser who is not impacted by this careening between the high of making the impossible possible and somedays feeling like maybe we are kind of selling duct cleaning—with apologies to those in the ventilation sector.

What can fundraisers do when things don’t go well?

One of the enigmatic things about fundraisers is our need for external affirmation and validation. We are called to serve and do not appreciate it when we are characterized or portrayed as less than professional. Fundraisers bridge the gap between philanthropists and the causes that need their support. We bridge that gap, and the funds we raise change the world and many times every single day. Amidst the noise and haste, you advocate for good and kindness and civic engagement for the communities you serve.

AFP can help you at such times. With friendship, training, a mentor or a cup of coffee.

What does leadership look like to you moving forward?

With leadership comes the responsibility to change. Old norms of interaction, especially in cases of power imbalance, must be eradicated. Everyone in our sector has every right to expect equity, fairness, gender parity and to feel safe in their workplace.

Is there anything you would tell your young self now, if you could?

I would tell my younger self, “Lead from where you stand. View your role right now as important. Put yourself at risk a little bit. Be open to change. Be gentle with yourself when you fall down. Seek to be the change in the world. Stand up for others”. And in so doing, hopefully, leave this rock a little better than when you found it. I believe that's all any of us can hope to do.