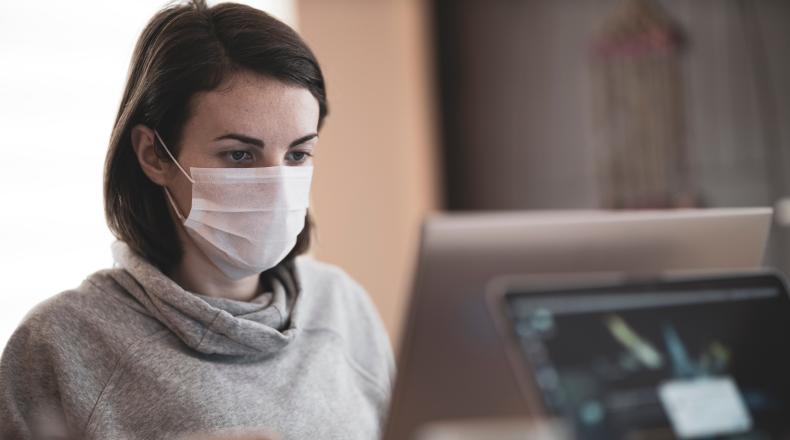 (This is the second in an occasional series of articles focused on how fundraisers are responding to the challenges of the pandemic. This article focuses on—in the midst of some successes—how much fundraisers have had to adapt and how much stress they are feeling.)

For fundraisers, the story of the past year—our pandemic year—has been one that’s included many successes, yes, but also a tremendous amount of upheaval and adaptation, as well as significant stress and loss.

Workplaces have been moved and fundraising programs are—in many instances—having to be managed on the fly.

In Kelowna, BC., Mischa Mueller, CFRE, is the director of philanthropy for the Kelowna General Hospital (KGH) Foundation and president of the AFP Okanagan, BC Chapter. When the pandemic hit, he said their focus became stewardship and, as a hospital, they were able to act as a COVID-19 resource for donors, keeping them up to date with trustworthy information on the pandemic.

“We worked from home for March and April but were shielded from the worst of the pandemic over the summer and started feeling pretty safe, like a little island,” he says. “Then, in November, the COVID-19 rates in our area began to rise. I’ve been working from home for the past six weeks, where I have two little ones.”

“COVID-19 impacted our on-site programming immediately,” says Daphne Carter, president of the Nova Scotia chapter of AFP and development manager at the Canadian Museum of Immigration at Pier 21 in Halifax. “The museum staff quickly adapted. We enhanced digital engagement with our visitors, allowing us to continue to deliver educational and cultural programs to Canadians across the country. In the fall, a direct mail appeal targeted event attendees and sponsors. The response was favorable.”

“As a regional hospital, we are major-gift heavy,” says Mueller. “Our biggest loss was our gala, which we hold every two years but we decided to hold it this year instead. We were planning to launch a major campaign, but we extended the quiet phase. And we did a mini-campaign around the COVID-19 emergency. Donors really came through and stepped up to support front line workers. From a major gift perspective, I don’t think we’ve been hit that hard, and we used the opportunity to build stronger relationships with our donors.”

“The timing of the pandemic coincided with scaling up our staff complement to meet the tourist season,” says Carter. “Those plans were put on hold. Thankfully, we were able to move forward with our usual staff complement by working from home, leveraging digital opportunities such as virtual tours, and continued research and exhibition projects.”

Gratitude and stewardship are featured heavily in many organizations, including Mueller’s and Carter’s.

“During the pandemic, we continued to check in with our donors and provide updates to promote our exhibitions and programming,” says Carter. “With fewer opportunities for donors to visit and see us in person, the summer edition of our donor newsletter provided a more personalized approach with a theme of gratitude. Donors heard directly from those who lead our programs. And each article was filled with gratitude about what their continued support makes possible.”

“We pivoted from launching a stroke campaign to a campaign of gratitude, a white heart campaign,” says Mueller, “where we collected well wishes for our front line workers from the community. And we worked with a well-known local photographer who took pictures of our hospital staff. It was satisfying being a conduit of gratitude—gratitude towards donors and gratitude from the community.”

Andrea Wright, MBA, is the executive director of the Vancouver Police Foundation (VPF) that is based in a city that’s been hard hit by the pandemic. She is focusing on major donors with a goal of retention and upgrade, leveraging the fact that major donors are at home now and she can schedule regular calls and check-ins with them. They have also retooled their communications to focus on the individuals running, and benefitting from, their programs. A new hire at the organization now has a mandate to engage more on social media.

“We’re getting more program people, as well as the executive of the Vancouver Police Department, involved with stewardship – thank you notes, thank you videos and so on,” says Wright.

“We’ve also started a virtual “Coffee with...” series to engage donors with people on the front lines, showcasing their day-to-day work, which is very different from the average citizen’s.”

She says the Vancouver Police Foundation is likely to meet or even exceed its fundraising target this year, but that achieving that goal will not come without a cost. Hard decisions, such as not hiring for a vacant position, had to be made.

“That meant our small team had to do quadruple duty last year,” she says. “Burnout is a very real concern for all of us.”

“I’ve always worked from home for World Vision, so when the pandemic hit, I helped teach our in-office team about the coping mechanisms you need to develop when you work from home,” she says. “It was going really well for two or three months but now the challenge is even greater for many. With people working from home, there’s the stress around the pace of work while dealing with family life, and the Zoom fatigue is real.”

From her vantage point, she’s seeing many organizations cutting critical fundraising staff. Membership in the Manitoba chapter has dropped from around 220 to 157 just in the last nine months.

“We are not hearing from our AFP members as much as we would like. Networking now is so important, especially for people who have lost their jobs. I want them to know they can turn to us. We are trying to make our professional development options and resources relevant to the real world.”

And, she says, “with people working at home, we can’t assume everyone’s situation is the same. When you compound that with the stressors of being a fundraiser, it’s not always an easy road.”

Chantal Gélinas, CFRE, director of principal gifts and special advisor to the president at the Université de Montréal, says she sees colleagues in Montréal who are really suffering by having to work at home since the beginning of the pandemic in March, or who live in small spaces, or have children to tend to, while dealing with an increasingly stressful work situation.”

“Will all this change the way we work?” she asks. “Will people continue to work remotely because it’s cheaper than renting space? The thing is, I think some organizations will do both, shared office spaces and remote working. But for charities that can’t no longer afford office space, I’m afraid for the fundraising professionals who are going to have to bear the brunt of it.”