Success in the Time of a Pandemic 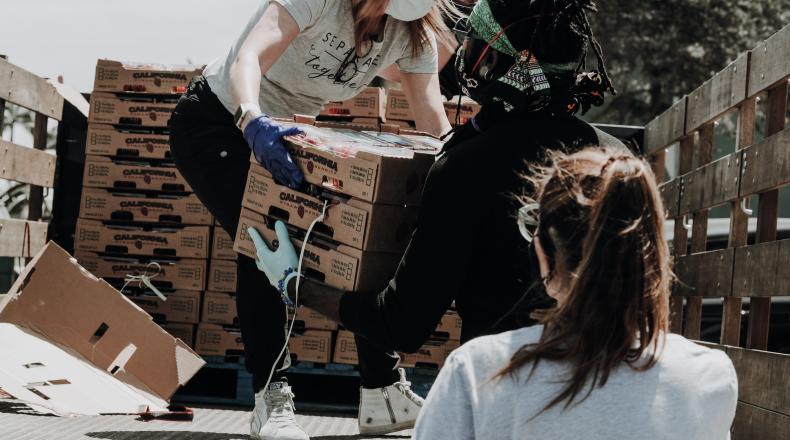 You could be forgiven if you raised an eyebrow when Food Banks Canada launched a $150 million campaign on March 18, the day the prime minister declared the country was locking down to try to keep the coronavirus pandemic from spreading further.

“As the virus has continued to spread, we are taking increasingly aggressive steps to keep you and your family safe,” the prime minister told the country. “I know that these measures are far-reaching. They are exceptional circumstances calling for exceptional measures.”

The lock down would put millions of people out of work, and the vulnerability of people with no job would become glaringly obvious in a matter of days.

Tania Little, CFRE, Food Banks Canada’s chief development and partnerships officer, had already been in self-isolation for almost two weeks by the time of the prime minister’s announcement. Her husband had come into contact with one of the first reported cases in Canada on March 6.

“When I was isolating, I got really plugged into what was happening within our global food network,” she said. “Food security people had a pulse on the ground in every country around the world and have since the pandemic’s scaling began in the fall of 2019.”

With the rest of Food Banks Canada’s team shifting to remote working on March 13, the leadership team began meeting daily. By Sunday, March 15, Little knew Ryan Reynolds and Blake Lively were planning to make a donation to Food Banks Canada and Feeding America.

She met with Food Banks Canada’s CEO Chris Hatch and organization’s leadership team to discuss going into a campaign. There’s never going to be a better time for the issue of food security, she told them.

“Having had seven years with Food Banks Canada, I had deep relationships with both our donors and our team, so I believed we would be successful,” said Little, “And I thought it was the right time to get out and for Food Banks Canada to build its national leadership voice.”

Hatch and the rest of the leadership team agreed.

“We made the campaign announcement on March 18 and were also able to announce the Ryan Reynolds and Blake Lively gift of $750,000. Having a first gift of that size with that kind of celebrity was a great way to kick-start the campaign,” says Little.

Then on April 8, the prime minister announced that Food Banks Canada would receive $50 million of the $100 million the government was designating to meet the urgent food needs of vulnerable Canadians.

And the campaign was going to soon get another boost when the four major national television networks joined forces to develop a 90-minute concert to help show Canadians their own strength through tough times. Food Banks Canada was selected as the charity beneficiary of the Stronger Together concert.

“By the time the networks came around, they were vetting six national charities. When they picked us, there were nine days left to make the show,” said Little. “We worked collaboratively with the major media conglomerates and the lead production team from Insight Productions to tell the story authentically, helping to bring content and produce the food banks segments for the show.”

Little says they reached seven communities in the food bank network and within 24 hours had seven stories the team was able to edit. And the A- list of Canadian celebrity participants just kept growing, up to and including, at the last minute, Drake.

The cooperation between all partners was incredible, Little says, and when the show finally aired, she couldn’t take her eyes away from the screen because it was so focused on the reality of peoples’ lives.

“And in terms of fundraising, we had the shock of our lives. In a normal year, we have about 2,000 annual donors. It's a small program,” she said. “The night the show aired, because we were operating in every time zone, we got on the phones at 5:30 p.m. We basically didn't get off until after one in the morning. And for a week after the show, we were on the phone for 12 hours a day helping to respond to generous Canadians who wanted to help.”

“After we worked through all the details, we had acquired 165,000 new donors in seven days.”

By May 12, less than two months after the campaign started, FBC reported to Strategy magazine that they had raised “more than $80 million, including $50 million from the federal government, $12 million from individual donors, $8 million from the Stronger Together concert, and another $18 million from corporate partners and private foundations.”

“We’ve been fortunate in that it’s worked for us.” says Little. “We went boldly out to Canadians to ask for support, and so many generously gave and aligned with us.”

Since the middle of May, FBC has received an additional $40 million dollars in pledges, bringing the total committed to just over $120 million.

“We are going through the data collection process right now, doing a COVID survey and talking to food banks coast-to-coast anecdotally,” says Little. “We’re anticipating we’ll see a substantive increase, about 30%, in the number of foodbank clients during COVID, especially as social supports wrap up this fall.”

Currently about 1.1 million families visit a food bank every month in Canada. A 30% increase would drive that number up to almost 1.5 million people.

“We are very concerned about what will happen when the federal income supports are reduced. For every 100 people on social assistance, 56 of them go to a foodbank, so we’re watching closely. We’re starting to see people get evicted from their homes, losing their cars,” says Little. “When we look at social assistance, employment stats, business closing, a sluggish economic recovery and everything that’s happening, it’s worrying.”

“The variables make it hard to predict because not every organization keeps the same data sets and the circumstances can vary,” Little continued. “Use of Daily Bread Food Bank in Toronto, for example, was up by 53%, yet use in other communities may have fallen flat. Food banks determine their own needs, based on their own situation.”

On August 13, the federal government announced a partnership with food security groups, including FBC, called the Surplus Food Rescue Program.

“The $50-million federal initiative [is] designed to address urgent, high volume, highly perishable surplus products falling under fruit, vegetables, meat and fish and seafood,” said The Honourable Marie-Claude Bibeau, Minister of Agriculture and Agri-Food. “These surpluses were created because the COVID-19 pandemic largely shut down the restaurant and hospitality industry, leaving many producers without a key market for their food commodities.”

FBC is part of the coalition to distribute the surplus food to vulnerable Canadians.

“We are very grateful for this investment by the federal government,” said Chris Hatch. “It leverages the deep supply chain expertise and knowledge the food banking network has, thereby helping in the most efficient manner those in Canada experiencing food insecurity. We are thankful for the opportunity to build deeper partnerships within the agri-food system, as well as to help ensure that highly nutritious, available food feeds people in need and that these resources are stewarded responsibly.”

“We have $29 million left to raise between September and March 2021 and get those resources into the community to help address the ongoing needs at the community level that food banks are seeing,” says Little.

FBC has been dispersing funds on a bi-weekly basis, distributing $50 million in cash and $40 million in food purchases. Eight million meals have also been prepared at the Rogers Centre in Toronto. The organization’s first accountability statement has just been released.

“It’s been exceptional to lead fundraising, partnership development and supply chain management at the same time,” says Little. “Prior to COVID, we didn’t really have a relationship with the Dairy Farmers of Canada, for example. Provincially, yes. But not on a national level.”

The new partnership has a donation component and a purchase component, all of which ultimately means $3 million of yogurt, milk and cheese products will be distributed through local food banks.

“We need to have and continue to develop more of these kinds of partnerships, which is what we intend to do,” said Little. “We’re grateful to the many individuals, foundations, corporations and the federal government for their investments in ensuring that food and fund support will get into the communities and support people when and where they need it.”