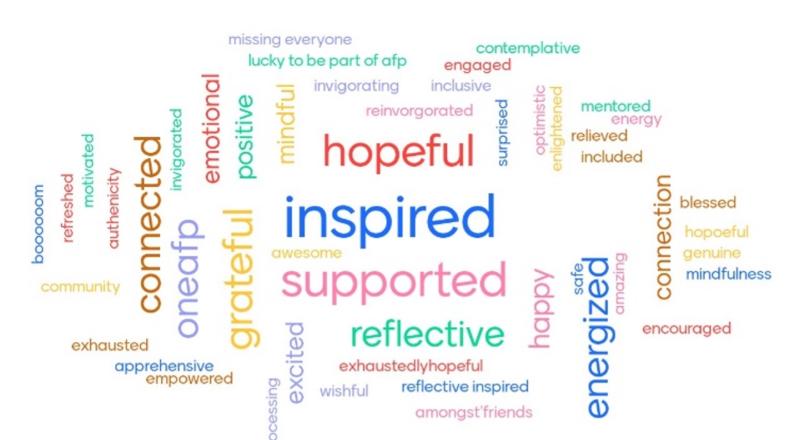 More than 125 AFP leaders from 21 chapters in Canada came together for the second edition of the Virtual Canadian Leadership Retreat, held this year July 21-22. It was a fun and energetic gathering that covered some of the difficult topics that our profession faced this past year and half. The discussions provided inspiration, deep thought and hope for the future.

Co-hosted by AFP Canada and the AFP Foundation for Philanthropy – Canada, the Canadian Leadership Retreat is an annual event that brings together AFP volunteer leaders to focus on the fundraising profession. Typically organized in conjunction with a host chapter, this annual gathering moves to different cities across Canada. For the second year in a row, we had plans to hold the retreat in Montreal only to be forced to change to a virtual event. We are extremely grateful for the Quebec chapter’s flexibility and look forward to working with them to bring the 2022 retreat to Montreal.

This year’s retreat kicked off with a virtual happy hour, sponsored by Blakely, which offered leaders the chance to meet new friends in Zoom breakout rooms, take part in a lively auction and enjoy the sounds of Quebec music. The fun-filled evening not only marked the start of the event but also turned into the beginning of our most successful retreat fundraising campaign in history! An impressive record of $15,000 was raised from 78 donors during the two days of the retreat to support the AFP Foundation for Philanthropy – Canada’s programs such as mentoring, the National Scholarship Program and research.

A special thanks to everyone who participated in the live auction, including our auctioneer, Scott Fortnum, MA, CFRE, ACFRE, and to the individuals who contributed fun and attractive auction prizes: one-on-one mentor/career coaching time with AFP President and CEO Mike Geiger, MBA, CPA; a virtual cooking class with Vincent Duckworth, CFRE; a customized TikTok dance video featuring Ken Mayhew; and a personalized tour of Montreal at the 2022 Canadian Leadership Retreat with Daniel Lanteigne, CFRE.

On July 22, the virtual retreat meeting, sponsored by iWave, took place. Leadership is at the core of this gathering, and organizers decided to apply a leadership lens to challenging issues facing our profession, such as diversity and resilience. We found the right balance between deep thought on substantial topics, sharing ideas and activities that inspire our work for AFP, and social and fun activities during the four-hour meeting.

The impact of AFP Canada and the AFP Foundation for Philanthropy – Canada was shared through reports from chairs Ken Mayhew and Jane Potentier, CFRE, focusing on  AFP Canada’s work in the area of government relations and national communications and the Foundation’s priorities of scholarship; IDEA (Inclusion, Diversity, Equity and Access), including the Fellowship in Inclusion and Philanthropy Program; and research . AFP Global Chair Kevin J. Foyle, MBA, CFRE, and President and CEO Mike Geiger, MBA, CPA, were then interviewed by moderator Diane Lloyd, sharing their reflections on leadership, diversity and being white, male leaders in the current environment. As Diane summed up so eloquently, we are inspired to follow leaders when we know them better, and being vulnerable is key. She thanked Mike and Kevin for opening up and being vulnerable.

Birgit Smith Burton, chair-elect for AFP Global, led a session called “Diversity *Twister: Moving from “a mix of people” to how well do people mix?”. Delegates were encouraged to recognize their own biases and challenged to focus on the impact of their words and actions on others. Birgit emphasized that if you have hurt someone, your intention doesn’t matter—we have to recognize microaggressions in themselves and our teams and address them when they happen, regardless of what we meant to do. The hour spent on this topic flew by!

Thanks to AFP Canada Board member Scott Fortnum, MA, CFRE, ACFRE, leaders had the opportunity to spend some time with Jackie Schleifer Taylor, PT, Ph.D., CHE, interim president and CEO of the London Health Sciences Centre. Scott and Jackie’s discussion was authentic and incredibly vulnerable. AFP leaders came away reflecting that resilience is not enough—we’re in the process of a cultural shift, a significant 180-degree turn, and we need to look at everyone differently. We must accept imperfection, including our own, and we must walk in empathy with others every day. While there is a very real feeling of exhaustion, there is an equally strong sense of hope.

The last session of the retreat, called Future Forward Positive, was hosted by AFP Foundation for Philanthropy – Canada Board Member Kirstin Ling. In breakout rooms, leaders reflected on the day’s discussions and what they might take away to inspire their work moving forward. Kirstin encouraged leaders to share a word that sums up how they were feeling. The result—the image above—speaks for itself. What a great way to wrap up the day!

A special thanks to this year’s generous sponsors: iWave, Blakely, Hilt, BNP GOLDIE Canada, MCR West, and Stephen Thomas Ltd, as well as Nicholas Offord. Their support enables us to continue our critical work across our country.

We are looking forward to holding the next Canadian Leadership Retreat in Montreal on July 21-23, 2022.