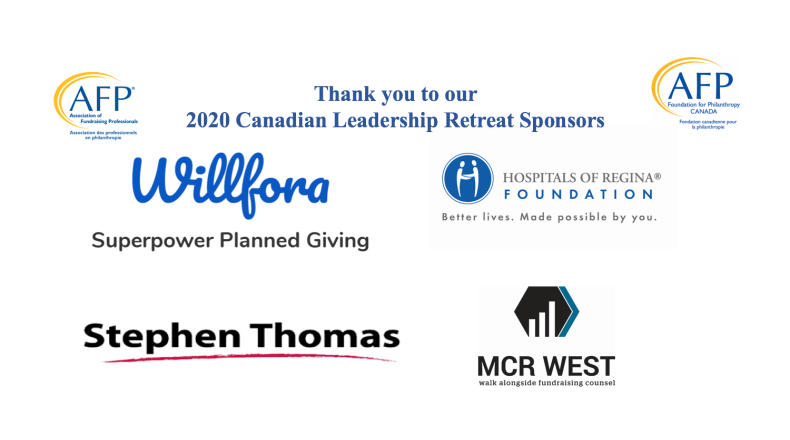 Last week, we hosted the first virtual edition of the Canadian Leadership Retreat sponsored by Willfora.com. We were thrilled to have 150 AFP leaders registered for the retreat which took place on July 23 - 24.

It was the 21st edition of this annual gathering, which was to have been hosted by the Quebec chapter. While it would have been great to spend time together in person in the beautiful city of Montreal, the virtual gathering lived up to the reputation of past retreats—informative, engaging and most of all, FUN!

On Thursday evening, the event kicked off with a virtual happy hour sponsored by Stephen Thomas Ltd. Leaders gathered—some with drinks in hand—to network, socialize and raise funds in support of the AFP Foundation for Philanthropy – Canada.

Using Zoom breakout rooms, leaders from coast to coast had the opportunity to meet each other. Scott Fortnum, ACFRE and professionally trained auctioneer, conducted a very exciting live auction for three fabulous prizes. For many it was their first Zoom live auction experience—based on how much fun it was, I expect we’ll see more in the future! I’d like to thank Paul Nazareth, Diane Lloyd, CFRE, and Mike Geiger for the prizes they donated to the auction.

The Friday retreat meeting, generously sponsored by the Hospitals of Regina Foundation, energized our leaders, many of whom commented that they came away inspired with new ideas. Updates from AFP, both at the national and international level, set the stage for the day’s discussions. Having the opportunity to learn about and contribute to priorities of AFP in Canada was an important part of the meeting.

The topics of leadership—resilience and relevance—and membership were the focus of two breakout room discussions. We know that small group discussion is where the magic happens, and Zoom breakout rooms did the trick!

We were absolutely thrilled and honoured to have the Right Honourable David Johnston, Canada’s 28th Governor General and chair of the Rideau Hall Foundation, join us as a special guest speaker. Thank you to MCR West for being our guest speaker sponsor. AFP Ottawa chapter president and president and CEO of the Rideau Hall Foundation, Teresa Marques, CFRE, led the discussion with Mr. Johnston before opening it up to questions from the audience—and there were many!

The fundraising that began on Thursday evening continued throughout the day on Friday. We raised $13,970 in support of the Canada Foundation—a record for the retreat! We were humbled by the generosity of our leaders.

On behalf of Susan Storey, CFRE, chair of the AFP Foundation for Philanthropy – Canada, and myself, I would like to thank the amazing AFP leaders who gave so much of their time to make this event a huge success. When events look easy, you know it’s because a lot of planning took place to make it look that way.

There was a large team of committed and enthusiastic team of volunteers that Susan and I had the pleasure of working with leading up to and during this event. Thanks to everyone for all that they did to make this retreat a great success. We truly enjoyed working with all of you.

We are very excited that next year’s retreat will take place in Montreal. We know the Quebec Chapter will do a super job of hosting it!