I remember 1993 very well, as I became a member of AFP and began the Master of Arts in Philanthropy and Development program at Saint Mary’s University of Minnesota as part of the third cohort. With great professors and great texts, I learned about our craft and planned for my CFRE, which I earned in 1995. 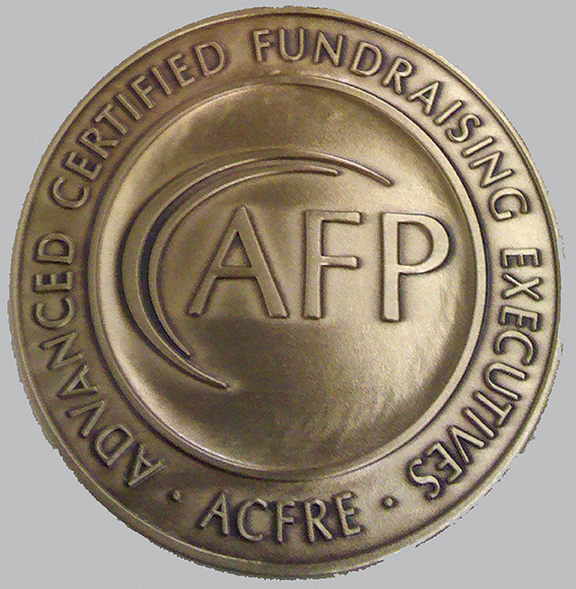 Just before this, in late 1992, the first Advanced Certified Fundraising Executive (ACFRE) exams were held, and in 1993, the inaugural class of 14 ACFREs was bestowed with this honor. These 14 individuals, many still active leaders in our profession today, forged the way for the credential and set the bar very high for the rest of us. To me, this group epitomized the role of master fundraiser. Committed to our profession as my career, I soon came to realize that I aspired to do the same.

Now, 25 years later, the number of ACFREs has grown. In January of this year, we welcomed Dr. Rebecca Davis as ACFRE No. 111. It was great to be able to tell Dr. Davis in person that she had passed her oral exam, the fourth and final step of the process, and to see her excitement with her achievement.

I too remember very clearly my friend, and this year’s Barbara Marion Award winner, Jim Allen, calling me as I drove north from Arlington to tell me the committee had passed me. That is now nearly seven years ago, in 2011, and yet it seems much more recent, as the memory is so vivid.

The ACFRE was a major achievement for me. In the 20th anniversary issue of the ACFRE publication, I said:

“I have received significantly more professional recognition from colleagues than I expected,” says Scott Fortnum, ACFRE, chief development officer at the St. Elizabeth Health Care Foundation in Markham, Ontario. “I think the achievement was a bigger deal than I originally thought. It forces one to think about what the key elements of the knowledge base are at the highest level, and it definitely confirmed my commitment to the role of fundraiser.”

The ACFRE is a big deal. It’s a tremendous personal journey. The ACFRE is not a high-volume or check-off-the-box type of credential. The process is rigorous. ACFREs demonstrate commitment to lifelong learning and service to the profession. They are builders of philanthropic communities, standard-bearers of ethical practice, distinguished practitioners, and thought leaders in the profession. Over the last 25 years, the number of people with the credential has grown slowly, organically. When we look across our sector, it is apparent we need many more ACFREs and the characteristics they embody.

If you have the breadth and depth of experience in the field, are confident in your skills, and are, as the expression goes, comfortable in your own skin, you may want to pursue this credential.

This is the 25th anniversary of the first ACFREs. We know that many of the people who start the process complete it even when there are bumps along the way. We know there is seldom a good time to take on an activity like this. We know that it takes a commitment of time and money to make this happen.

While we can’t give you more time, we can help a bit in the financial realm. For a limited time, from now through the end of the Leadership Academy (Oct. 12, 2018), the ACFRE application fee of $400 is dropped to $125 in celebration of the 25th anniversary. So, if you have a CFRE, FAHP, IADF, and ten years of experience as a professional fundraiser, or 20 years of experience without the other credentials, you may qualify. Check out www.acfre.org for qualification and application details, and, if you meet the criteria, know that you’re encouraged to apply. We can help you find a mentor and help move you toward this achievement.

Now, if you’re reading this and you’re not ready to move forward, I encourage you to check out the website. ACFREs have expertise in all areas of fundraising and nonprofit leadership. Many of the fundraising books we use have an ACFRE as an author. The knowledge base is deep and broad. Also, we see from many member surveys that there is a need for more presentations on advanced topics like leadership, ethics, and management, and we can help. On the site, there’s a “Request Speaker” tab. Fill this out, and we will try to introduce you to an appropriate speaker. Many times, there are great speakers nearby who would love to participate.

Scott Fortnum is president and CEO of Children’s Health Foundation in London, Ontario, and has worked as a professional fundraiser since 1990. As a staff member and consultant, he has worked with major organizations across Canada, including universities, hospitals, and national nonprofits. Scott has also been an instructor at a number of colleges and universities in Canada and the United States. He has held the CFRE designation continuously since 1995 and became the 92nd person to earn the ACFRE designation, in 2011. He joined the ACFRE Certification Board in 2014 and currently serves as its chair.

From the Chair: Imagining the Future of Our Community