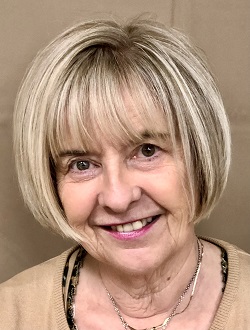 (Arlington, Va.) Carole Richard, CFRE, a long-time fundraiser who has given back so much to the profession as a leader, volunteer, teacher and mentor, will be recognized as a Distinguished Fellow of the Association of Fundraising Professionals (AFP) at its 2022 International Conference on Fundraising (ICON), May 2-4, in Las Vegas, Nev.

The AFP Distinguished Fellows Program recognizes individuals who have made significant leadership contributions to the association, philanthropy and the fundraising profession, and who will continue to advance ethical and effective fundraising through their volunteer and advisory work. The designation represents the pinnacle of service to the profession and the AFP fundraising community, as well as to the tenets of giving, volunteerism and philanthropy. Richard joins three other fundraisers as 2022 Distinguished Fellows, bringing the total number of Fellows to 20.

Richard has raised millions of dollars for nonprofits during her 30-year career in fundraising and has touched thousands of lives in the Northern San Joaquin Valley of California through her philanthropic work in the education, health and arts sectors.

“AFP has always provided me excellent professional development throughout my career and resources that I have worked to share with others,” said Richard. “The network of professional colleagues I developed also led to lifelong friendships. I am grateful that they nominated me and proud to be a part of this amazing organization.”

Outside of her fundraising career, Richard is also a committed and active member of AFP and is passionate about working to advance philanthropy through advocacy, research and education in the Yosemite region. She is the founding member of the AFP California, Yosemite Chapter, and has served the chapter and the local philanthropic community in many capacities over the past 23 years. She has led and co-chaired numerous local AFP conferences and events, served as speaker at chapter luncheon meetings on topics such as planned giving and ethics, and has been a presenter at the AFP International Conference on Fundraising, the largest conference of fundraisers in the world.

In addition, Richard has served on the board of the Yosemite Chapter in various capacities, including president, certification chair, vice president of education and most recently, ethics chair. She is also very involved as a mentor to colleagues in the chapter. For her efforts, she was honored as the chapter’s Outstanding Fundraising Professional in 2005.

Outside of AFP, Richard has been a presenter at California State University, Stanislaus as part of its Certificate in Nonprofit Management. She is an active member of several community organizations, including Modesto Rotary and Toastmasters International, and is a graduate of Leadership Modesto. She is also a past member of the United Way’s Women’s Council.

In addition to mentoring fundraisers, she has spoken at numerous Career Day programs in the Yosemite region, sharing the world of development with elementary, high school and university students.

“Carole Richard is the epitome of a fundraising professional and an amazing volunteer and servant leader to the fundraising community,” said AFP President and CEO Mike Geiger, MBA, CPA. “She has worked tirelessly to not only to raise millions of dollars for social causes, but she has dedicated her career to giving back and teaching new generations of fundraisers the knowledge and skills they need to be successful. I am so looking forward to recognizing Carole for everything she has done for AFP and the profession.”

More information about the Distinguished Fellows program and the AFP International Conference on Fundraising can be obtained by contacting Michael Nilsen at Michael.Nilsen@afpglobal.org.