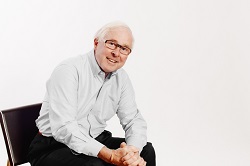 (Arlington, Va.) Stephen Thomas, CFRE, a fundraiser of nearly 50 years who is described as the “guru of Canadian direct mail fundraising,” will be recognized as a Distinguished Fellow of the Association of Fundraising Professionals (AFP) at its 2022 International Conference on Fundraising (ICON), May 2-4, in Las Vegas, Nev.

The AFP Distinguished Fellows Program recognizes individuals who have made significant leadership contributions to the association, philanthropy and the fundraising profession, and who will continue to advance ethical and effective fundraising through their volunteer and advisory work. The designation represents the pinnacle of service to the profession and the AFP fundraising community, as well as to the tenets of giving, volunteerism and philanthropy. Thomas joins three other fundraisers as 2022 Distinguished Fellows, bringing the total number of Fellows to 20.

“I am honoured to be recognized in this way by my peers,” said Thomas. “I join a remarkable group of women and men who have received this honor, including my friends Kay Sprinkel Grace, Mal Warwick and the late Simone Joyaux.”

Throughout his career, Thomas has continued to build and give back to the profession, working to connect fundraisers together and share knowledge, techniques, and ideas through consulting, teaching, and mentorship. He has served in many role for the AFP Canada community, including co-founder and chair of the AFP Canadian Fundraising Congress, and board member and president of the AFP Greater Toronto Chapter between 1996-2002. He was Canadian Ambassador for the International Fundraising Conference (IFC) from 1993-2008 and became chair of the IFC in 2004 and 2005. He also served on the board of its parent organization, the London-based (UK) Resource Alliance, for eight years, including the last two years as co-chair. His efforts helped create a sense of community within the global fundraising profession and have established ways and means to share ideas and learn from one another.

Outside of fundraising, Thomas has a long history of volunteering and participating in some of his other passions such as high school basketball coaching. In 2013, he joined the Board of Canada’s History Society and is also a fellow of the Royal Canadian Geographical Society.

“The fundraising community in Canada—as well as direct mail around the world—would not be what it is today without the efforts and contributions of Stephen Thomas,” said AFP President and CEO Mike Geiger, MBA, CPA. “His pioneering work in direct mail has raised millions and millions of dollars for so many charities around the world, and his legacy will continue to impact fundraising forever.”

More information about the Distinguished Fellows program and the AFP International Conference on Fundraising can be obtained by contacting Michael Nilsen, vice president of communications, at Michael.Nilsen@afpglobal.org.