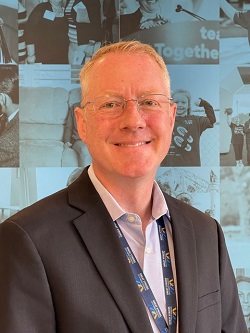 (Arlington, Va.) Patrick J. Feeley, MBA, CFRE, a long-time fundraiser with more than 25 years of experience in the profession and a leader of the global fundraising community, will be recognized as a Distinguished Fellow of the Association of Fundraising Professionals (AFP) at its 2022 International Conference on Fundraising (ICON), May 2-4, in Las Vegas, Nev.

The AFP Distinguished Fellows Program recognizes individuals who have made significant leadership contributions to the association, philanthropy and the fundraising profession, and who will continue to advance ethical and effective fundraising through their volunteer and advisory work. The designation represents the pinnacle of service to the profession and the AFP fundraising community, as well as to the tenets of giving, volunteerism and philanthropy. Feeley joins three other fundraisers as 2022 Distinguished Fellows, bringing the total number of Fellows to 20.

Feeley’s fundraising career has included leading major fundraising programs and campaigns in local and national education, health care and social service organizations. He is currently leading the comprehensive fundraising program at the Cystic Fibrosis (CF) Foundation, which is in the midst of a nationwide Milestones III Campaign. Prior to joining the CF Foundation, he helped lead Caron Treatment Center’s successful $100 million “Open the Door Campaign”—which worked to support the Center’s comprehensive addiction and behavioral health treatment programs. Along with his achievements in fundraising, Feeley has exemplified effective and ethical fundraising throughout this career.

“I am so deeply honored to be chosen for this year’s Distinguished Fellows Award from the Association of Fundraising Professionals,” stated Feeley. “I’ve been in fundraising for more than 25 years and find it so humbling to be selected and recognized by my peers, particularly for a professional award from AFP!”

Feeley has been a leader in the AFP fundraising community for many years and continues his service to this day, currently working as a member of the Governance Committee and the AFP Foundation for Philanthropy Planned Giving and Nominating Committees. He was previously treasurer of the AFP Greater Philadelphia Chapter before serving AFP Global in a number of volunteer position, culminating as chair of the entire association for two years in 2015 – 2016.

Feeley is committed to supporting and mentoring other fundraisers, diversifying the profession and expanding the fundraising community around the world. He helped champion the creation and distribution of AFP’s Diversity and Inclusion Survey Report, the association’s first comprehensive study of inclusion and diversity in the profession. Under his leadership, AFP held new events for emerging leaders and collegiate members, introduced new awards and recognitions, including the Outstanding Young Professionals Award and the Distinguished Fellows program, and expanded its reach across North America through the development of the New Horizons Task Force that ultimately led to the creation of AFP Canada.

“Pat’s legacy, both as a consummate fundraising professional and as a leader of AFP and the global fundraising community, is extraordinary,” said AFP President and CEO Mike Geiger, MBA, CPA. “Several of the programs he helped institute continue to guide our community and make such a difference in our profession. Pat has made such significant contributions to fundraising and philanthropy as a leader, mentor, volunteer and professional, and it’s only fitting that we honor him as one of our 2022 Distinguished Fellows.”

More information about the Distinguished Fellows program and the AFP International Conference on Fundraising can be obtained by contacting Michael Nilsen, vice president of communications, at Michael.Nilsen@afpglobal.org.