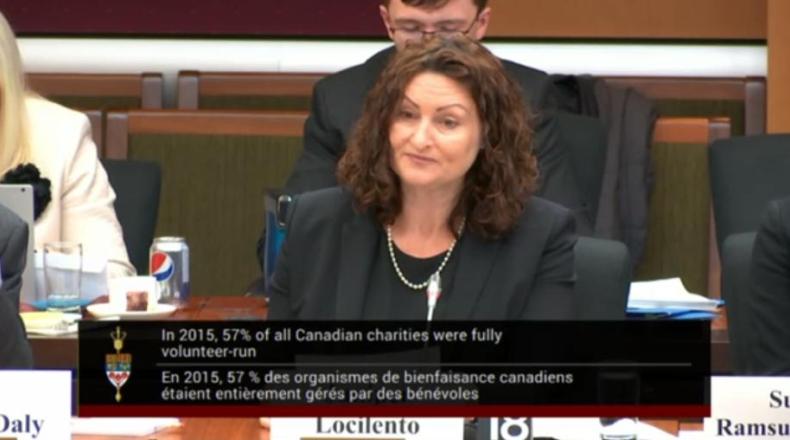 What questions does Juniper Locilento, senior director, development at the YMCA of Greater Toronto ask herself as she heads into work every day?

When Juniper Locilento appeared before the Senate Committee on the Charitable Sector in her capacity as VP of Public Affairs for the AFP Greater Toronto Chapter on March 18, 2019, her five-minute submission summarized the most foundational pillar of fundraising.

“There is a well-documented connection between asking for, and securing, charitable contributions,” she told the committee. “The power of the ask has been demonstrated in experimental studies. Asking not only increases the probability of donating but also the amount that people give.”

She quoted the AFP Foundation for Philanthropy - Canada’s own biennial study, What Canadian Donors Want, which found 75% of people specifically asked to give will do so, compared to 53% of those who are not asked. That 22% differential represents hundreds of millions of incremental revenues that could enable charities to better address urgent need.

Fundraisers play a vital link between charities and their supporters, Juniper argued, and while Canadians acknowledge fundraising is important, they also have concerns.

“The percentage of Canadians who believe charities are honest about how they use their donations has dropped 14 points, from 84 to 70% during the period of 2000 to 2013. In addition, 52% of people think charities spend too much on fundraising, and 34% expect all funds to go to the cause,” according to the Talking about Charities report published by the Muttart Foundation in 2013.

“It’s a conundrum. The practice of fundraising is seen, on one hand, as too professional—too slick, too costly and ethically questionable—and, on the other, as not professional enough—not adequately efficient or effective, reliant on volunteers, and lacking formal educational requirements.”

“We’ve all experienced this as fundraisers,” she said, over coffee in downtown Toronto in late May. “Many of the volunteers we work with don't know that fundraising is a profession or a discipline with a body of knowledge. And you don't get to go into a meeting, hit them over the head and say, oh, by the way, I’d just like you to know that I'm extremely qualified to do this work. Ideally, you have to prove it to them over time.”

Juniper believes that a limited understanding of fundraising has a direct impact of on fundraisers' ability to do their job well. She marvels at how the fundraising environment has changed.

“I started out my first fundraising job in 2005,” she said. “I went into [fundraising] thinking I'm going to do good.  Somewhere along the way, things became much more complex.”

The increasing demands are putting stress on fundraisers.

“You know, the [fundraising] pie is the pie. We can, maybe, grow the pie a little bit. But if you add up all the campaigns from Toronto, for example, right now, it's mathematically impossible for them [all] to succeed. And yet everybody sort of operates on this assumption of we'll just work harder.”

“I was at the AFP ICON 2018 conference in New Orleans last year and heard a speaker use this term I hadn't heard before—disintermediation. He said we’re living in this time of disintermediation and asked, what does this mean for you as a fundraiser?”

The term disintermediation is defined as “a reduction in the use of intermediaries between producers and consumers.” In the case of philanthropy, that could be between a donor and a charity or between donors and the people the charity serves. Examples of disintermediation could be the Go Fund Me pages that pop up during a crisis or organizations such as GiveDirectly, where you can donate directly to a family without going through a typical charity.

At the same time, the charitable sector is being affected by the automation hitting all other public and private sectors, says Juniper.

“One of my top three takeaways from the entire AFP ICON 2018 conference was that disintermediation is a risk to the fundraising profession that I don't think we're prepared to grapple with. Our business model is based in building relationships with donors—but what if they don't want to have a relationship with your charity?”

“At the same conference, I was walking around in the Exhibitors’ Hall and I have never seen so many CRM vendors in my life. And some of them were basically saying you don't actually need a body in your office because this system will do your fundraising for you. And there is a risk, however ill-thought out, that we could be replaced by technology. I think we should all be concerned.”

Juniper says her Masters of Philanthropy and Nonprofit Leadership (MPNL) from Carleton University challenged her to look at the broader issues facing the nonprofit sector in Canada.

“That’s what critical thinking does, right? It allows you to look at questions where you don’t really have the answer. Fundraising is not just about step A, B, C, D, always in the same order. Not only do you need to remain flexible in your approach to working with donors, you need to consider the context in which you're operating. Whether the factors are economic, political, social, or technological, they all impact our ability to be effective fundraisers. The more we understand about the broader issues, the better equipped we will be to do our work.”

“With all of the dynamics happening in the charity sector,” concludes Juniper, “I found it meaningful to have the opportunity to speak to the Senate Committee on the Charitable Sector on behalf of AFP members in Canada. I hope it helps to advance government's understanding of the role of charitable fundraising in Canada, so we can meet the challenges now and in the future.”