Beth Breeze is the winner of the 2022 AFP/Skystone Partners Research Prize for her book “In Defence of Philanthropy.” 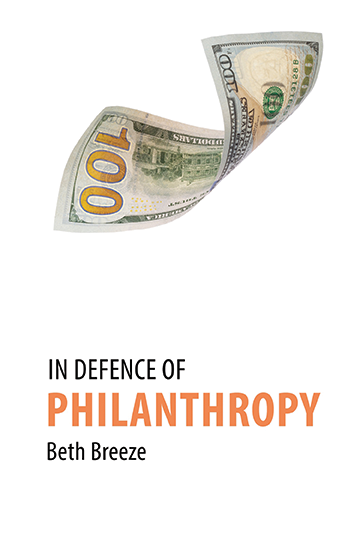 I began my career as a fundraiser and think it is one of the best jobs in the world. There is immense satisfaction in bringing together people with resources who care about causes and organizations that need those resources. But we all know it is not an easy task—fundraising is hard in any climate, and harder still when people are affected by recession, inflation and rising cost of living. A major motivation for writing this defence of philanthropy was because widespread criticism, which sometimes boils over into anger at philanthropists, is making a tough job even tougher. I wanted to explain, in a readable way with lots of examples and storytelling that goes beyond the usual focus on the same big names, the constructive role that philanthropy can play in society and the damaging consequences that unconstructive—and often uninformed—critique can have.

My argument is that attacks on ‘big giving’ have become more commonplace over the last decade or so, and that they are coming from at least three different directions: ‘academic critiques’ that view philanthropy as fundamentally undemocratic, ‘insider critiques’ that castigate givers for picking the “wrong” causes, and ‘populist critiques’ that views all giving as a self-interested scam. The essentials of these arguments are long-standing and contain some seeds of truth: donors are not elected, some giving is more effective than others, and mixed-motives are the norm. What’s new is the unprecedented scale and volume of these criticisms, their instant spread via moral grandstanding on social media, and the lack of any discernible counter-argument.

I understand why philanthropists themselves might hesitate to push back: who wants to hear from privileged people who feel misunderstood? But having worked as a fundraiser, and knowing how reliant many nonprofits are on donated income, it became clear to me that a defence of philanthropy was needed. We know that negative reinforcements decrease the likelihood of that action taking place (who will give if giving is seen as proof you’re a tax-dodging egotist?). So, if hyper-criticism of philanthropy risks curtailing donations then it urgently needs a response, because charities cannot run on goodwill alone.

Almost all of us benefit in some way from the work of organizations that need philanthropic gifts of all sizes to fund activity that benefits everyone, such as stronger communities, a cleaner environment, medical advances and new knowledge. Donations that funded vaccines and cures for COVID-19 benefited people of every wealth bracket, and the same is true for philanthropic efforts to mitigate climate change. But the highest price for a world with less philanthropy would be paid by those facing the toughest life circumstances—who fall through whatever public sector safety net exists where they live, who cannot purchase all their necessities in the market, and who are therefore most reliant on the kindness of strangers.

Exposing the unfair generalizations and over-statements in common critiques of philanthropy is, of course, not the same thing as defending every philanthropist and every philanthropic act. There remains a need to root out and expose poor philanthropic behavior, and to gently help everyone to become more thoughtful and effective in their giving. But nuance is lacking in most critiques. One name (most often ‘Sackler’), or one word (such as ‘undemocratic’ or ‘tax-subsidised’) is usually enough for critics to feel they have “won” the argument. Case dismissed. Yet in no other area of life do we generalize so easily from an extreme case. Clearly, there is more nuance in the academic critiques, yet ‘democracy’ amounts to more than just voting—that’s a very narrow way of conceiving how the public can contribute to the functioning of society: Vote then shut up!

The field of philanthropy has become a dumping ground for generalized worries and performative posturing: “The world shouldn’t be like this…” is the rallying cry of critics. But it is!

Conceding that some good can, and has, come from private donations—including funding of campaigns to change the laws on slavery, suffrage and same-sex marriage—enables us to move away from the suggestion that philanthropy is a fundamentally illegitimate activity, to focus instead on its improvability. Things can always be done better, but it is a classic mistake to let perfection be the enemy of good, and the price of that mistake will be felt most acutely by those most reliant on private giving.

Simply noting that philanthropy can be a force for good—which seems unarguable if, for example, you are the parent of one of the millions of children whose life has been saved by philanthropic funding of vaccination programs and disease eradication efforts—is to invite accusations of being a naïve apologist for the rich. The fact that many rich donors share concerns about growing inequality, and are in favor of more progressive taxation, is conveniently ignored by those who use philanthropy as a lightning rod to channel all of their concerns about the state of the world today. Wealthy non-givers are left in peace to indulge in conspicuous consumption or to hoard their wealth, whilst those who stick their head above the philanthropic parapet are shot down. The field of philanthropy has become a dumping ground for generalized worries and performative posturing: “The world shouldn’t be like this…” is the rallying cry of critics. But it is! So, what are we, collectively, going to do about it? Knocking the minority of the wealthy who are generous is an awful lot easier than doing the hard work of re-imagining and re-building social and economic structures.

Contrary to populist expectations, there are many philanthropists on public record recognizing that current structures are not serving society well. Examples of philanthropy invested in challenging the status quo include efforts to support grass-roots social justice organizations, to empower beneficiaries, to tackle inequality, and to expose and reverse class and racial privilege. Examples of philanthropically-funded efforts to tackle structural economic challenges include the Omidyar Network’s $35 million initiative to ‘Reimagine Capitalism,’ with a focus on advancing workers’ rights—a theme also present in MacKenzie Scott’s grant-making, which featured a number of labor organizations. The Ford Foundation’s prioritization of funding social and racial justice includes alignment with the concept of ‘inclusive capitalism’ to create “an equitable, sustainable future … that works for everyone.” According to the foundation’s president Darren Walker, this includes pushing corporations to look beyond shareholder returns to focus on the welfare of employees and local communities.

The belief that philanthropy only ever advances elite interests is, therefore, clearly unfounded, as are many other elements of common critiques of philanthropy. Pointing out the lack of robust evidence for critical stances will not necessarily change the minds of those deeply attached to an anti-philanthropy view. As Ben Goldacre wrote in Bad Science: “You cannot reason people out of positions they didn’t reason themselves into.” But many people who are hearing and repeating critiques may well be receptive to the different perspective that I try to offer within “In Defence of Philanthropy.” We need to acknowledge the improvability of philanthropy, highlight efforts to make private giving more ethical and effective, and explain the positive potential of philanthropy. It is time to speak up and defend philanthropy.

Beth Breeze, Ph.D., is the director of the Centre for Philanthropy at the University of Kent, and author of “In Defence of Philanthropy” https//www.agendapub.com/books/119/in-defence-of-philanthropy.