Transforming a Devastated Island Through Philanthropy 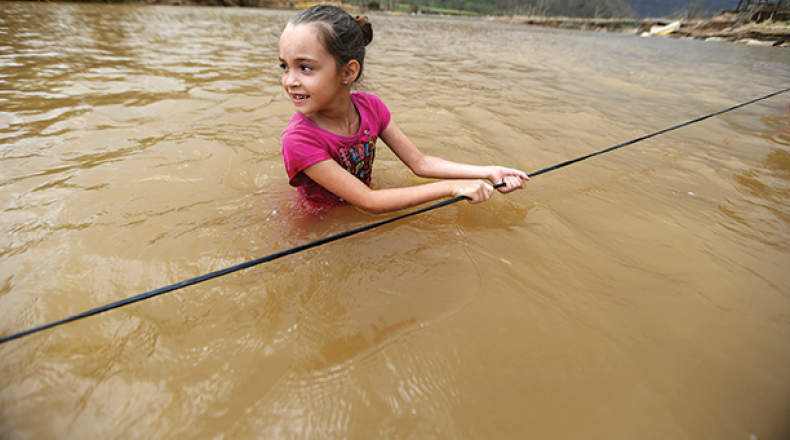 Above: Ruby Rodriguez, 8, looks back at her mother as she wades across the San Lorenzo de Morovis River with her family. The bridge was swept away by Hurricane Maria on Wednesday, Sept. 27, 2017. They were returning home after visiting family on the other side (AP photo, Gerald Herbert).

The morning of Sept. 20, 2017, Hurricane Maria’s winds lashed the Puerto Rican archipelago, home to 3.5 million people. The Category 5 storm traversed Puerto Rico diagonally, enveloping the islands. The results were dramatic and catastrophic. No part of Puerto Rico was spared. The worst natural disaster in 90 years came on the heels of Irma, a hurricane that had wreaked havoc in Puerto Rico 13 days earlier.

The original estimated number of deaths was 1,085 people. Then a May study by Harvard University determined the death toll to be closer to 5,000. One estimate of the cost of rebuilding is $95 billion.

Those who survived the hurricane lived through a major humanitarian crisis. Maria’s unprecedentedly strong winds completely destroyed 87,094 homes and severely damaged another 385,703, affecting hundreds of thousands of men, women, and children.

Maria knocked out power for months and leveled the communications infrastructure. Millions of trees were defoliated, snapped, or uprooted. Agriculture was decimated. The extreme rainfall caused an overwhelming, occasionally record, overflowing of rivers and streams, pervasive mudslides, and extensive damage to structures, roads, and bridges. In some coastal areas with poor drainage, the failure of water pumps resulted in flooding by rain, sewage, and sea water.

Tens of thousands of people were cut off from the surrounding communities by the tons upon tons of natural and human-made debris spread across the islands. Many had to be rescued and evacuated.

Basic necessities such as food and clean water, fuel, medicines, and emergency medical care were either totally unavailable or in short supply.

Against this backdrop, in the days following Maria, people of goodwill from around the globe joined in providing relief to Puerto Rico in a period of darkness. They responded to news accounts, as well as to appeals for philanthropic aid coming from many quarters.

While Puerto Rico’s governor sought support in Washington, D.C., First Lady Beatriz Areizaga, who had organized a disaster fund after Hurricane Irma, pleaded for aid from the public and the private sector to help the hundreds of thousands affected by the hurricane.

The result was an extraordinary, widespread, and inspiring philanthropic response to the calamity. The generosity, in the form of donations, grants, volunteerism, and other contributions, made a substantial, constructive difference in the recovery of Puerto Rico.

On the ground, nongovernmental organizations (NGOs) specializing in social services and healthcare mobilized almost immediately to help communities in need. Despite the overwhelming logistical, transportation, and infrastructure obstacles, NGO staff and volunteers began to receive, collect, and distribute the admixture of “care packages”; clean water; infant formula; hygiene supplies; shelter/home repair kits and tools; emergency medicines, medical equipment, and supplies; generators, batteries, lanterns, and solar light kits; and insect repellent all, among the essential items being sent to the Island.

NGOs also moved beyond their normal areas of endeavor to meet needs created by the emergency. By way of example, Para la Naturaleza (PLN), Puerto Rico’s largest and oldest environmental organization, adapted its core mission to the circumstances, created the PLN Community Fund, and channeled relief directly to 30+ communities near its 60 nature preserves and historic sites. In addition, PLN provided financial and technical assistance to create sustainable agricultural efforts and jumpstarted the process of reforestation and the restoration of natural habitats. Within weeks, the fund had reached its $1 million goal, allowing PLN to do even more. It reached $2.5 million by mid-May.

Christian, Jewish, and Islamic faith-based NGOs were among the entities that channeled millions of relief dollars to the island. Frequently, that support included the mobilization of volunteers from churches, synagogues, and mosques beyond Puerto Rico’s shores. The United Methodist Committee on Relief provided nearly $20 million for the rebuilding of 450 homes in 15 municipalities through the local United Methodist Church, as well as cadres of volunteers. Virtually every established church mobilized to provide support to the relief effort, most counting on philanthropic support and volunteers from overseas.

As airline service was restored, and more and more volunteers began to arrive, the scope and breadth of the recovery efforts and services available to victims grew exponentially. Organized by NGOs, university students, churches, and civic groups among other entities, volunteers from all over the globe could be found throughout the island.

It is impossible to know just how many, but in all likelihood hundreds of thousands of individuals donated to the efforts. Some gave directly to NGOs or to the 100+ plus funds that responded to the hurricane. Many used organizational websites and others crowdfunding like YouCaring, while others gave by postal mail to their charity of choice. Individual donors ranged from retired Puerto Rican investment bankers in New York to a famous Washington, D.C., arts administrator, as well as a youthful, professional Canadian poker player, the Funsters women’s group in the Midwest, children at an elementary school in Berkeley, and countless anonymous donors.

Small businesses as well as multinationals provided cash, in-kind contributions, and other forms of support. The Gap, for example, not only contributed nearly $1 million to recovery efforts but also organized volunteers who dedicated 4,000 hours to relief efforts. In addition, the clothing retailer made $80,000 in emergency cash payments to its employees in Puerto Rico. Several other corporations followed suit, continuing to pay their employees their regular salaries despite the temporary closure of their island operations. It’s worth noting that corporate in-kind contributions were made by virtually every airline that services Puerto Rico, including American and JetBlue, and delivery companies DHL and UPS made possible the delivery of tons of food, water, generators, and other badly needed relief supplies.

Puerto Rico’s grantmaking foundations, partially immobilized by the same devastation as the people they sought to serve, mobilized quickly, providing funding from their own coffers, raising and distributing funds to NGOs, or both. The Forward Puerto Rico Fund of the island’s Foundation Network (Red de Fundaciones) set a goal of $5 million shortly after Maria and by mid-May had already raised $3.3 million, of which $1 million had been distributed. The network expected to have reached $6 million by the summer of 2018, most of which will be designated for long-term, disaster-related goals. A $1 million gift from Banco Popular de Puerto Rico, the island’s largest bank, kick-started the institution’s Embracing Puerto Rico fund. That fund, administered by the bank’s foundation, has since grown to $6.1 million. Local foundations were joined in their efforts by U.S. foundations, ranging from small family foundation gifts of $5,000 to the $500,000 gift from the Hand in Hand Foundation. All told, support from foundations totaled millions of dollars.

Local, U.S., and international NGOs that were able to address emergency local needs thanks to philanthropists big and small included the Boys & Girls Clubs of Puerto Rico; the Caño Martín Peña Project; P.E.C.E.S.; the Centros Sor Isolina Ferré; Habitat for Humanity; Salud para Culebra; and the P.R. Food Bank, among countless others. The available financial (and human) support was being put to use in the rebuilding or construction of homes; the provision of essential social and health services, including psychological support services to children and families traumatized by the hurricanes; investments in community infrastructure that will ensure access to clean water and solar power; and many other critical projects.

As the need for emergency relief to address emergency needs dissipates, the nonprofit sector is counting on the outpouring of support to address future needs created by the disaster that was Maria. In anticipation of the September peak of Puerto Rico’s hurricane season, many organizations have been working to ensure that the more vulnerable and affected communities are as resilient as possible and ready to respond more adequately and deliberately to any future disaster.

This resilience is not just about physical preparations, such as making facilities more secure and resistant to major winds and having generators and fuel on hand. The focus has been on creating access to renewable energy sources and independent access to clean, filtered water year-round, as becoming food independent. In sum, it is about preparing the communities to become self-reliant. This is what propelled Para la Naturaleza to include, as part of a long-term strategy, retrofitting 50 community centers to equip them with sustainable solar power and water filtering systems; financing and empowering small farmers; and planting nearly 1 million hurricane-resistant native and endemic trees. Other NGOs are similarly engaged, strengthening the natural and human landscape, capitalizing upon the strong sense of community and collaborative spirit that were engendered by Maria.

The island of Puerto Rico is steeped in beauty but also in troubles. It has been battered not just by the massive hurricanes Irma and Maria in 2017 but also by economic woes and population decline that have weakened the island since 2006.

AFP’s Puerto Rico Chapter likewise has its strengths and challenges. It is a small but robust community, a vital force for philanthropy and for community-building. Its president, Margarita Mendez, joined the chapter 15 years ago, and she has held leadership positions most of the time since.

“Our AFP chapter promotes ethical principles and standards and the Donor Bill of Rights. Understanding and abiding by these rules gives our members credibility,” says Margarita. “We teach fundraising approaches and offer accreditation programs.” The chapter also foots the bill on occasion for guest speakers like Laura Fredricks of The Ask and social media experts. “These speakers are educational as well as inspirational,” says Margarita, and the chapter has even added special events in Spanish and English for the general public.

Margarita also points to the chapter’s work on proposal ethics, legacy gifts, and inheritance laws. “Inheritance laws are difficult for us,” she says. “Most people don’t have the know-how to establish a foundation, so that is why we hold educational seminars for family attorneys, tax accountants, and insurance agents. Nonprofits are becoming older, as are baby boomers. Yet giving is not culturally ingrained in our families.

“Finally,” says Margarita, “our chapter has good relationships with the business community. They loan us the use of their auditoriums and provide many in-kind services. Clearly, there are many positives for the chapter to build on.”

Roberto Soto-Acosta, an AFP member, began his career in New York in 1978. He moved to Puerto Rico in 1991, where he created the development office at the Ana G. Méndez University System and later founded IMAGINE Consultores, which has successfully provided fundraising for educational, artistic/cultural, environmental, and social welfare/health organizations. He earned his B.A. from Manhattanville College and an Ed.M. at Harvard.