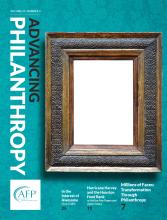 Think back: 2017 was a story of natural disasters of epic proportion. Wildfires blazed across California and broad stretches of the West. Hurricanes Maria, Irma, and Harvey killed thousands and destroyed half a million homes, with much of the damage concentrated in economically strapped Puerto Rico. In Mexico a 7.1 magnitude earthquake rocked the capital along with a half dozen Mexican states. These and other articles in “A Million Faces” describe the fundraisers, donors, nonprofits, and valiant citizens of all ages who helped transform tragedy into redemption. Their work continues as lessons learned are transferred to new cohorts of fundraisers and nonprofits. This, too, is the story of 2017, of people caring, making a difference, and sharing what they have learned. Articles in this issue

From the President / Innovating in the Right Way

Millions of Faces: Transformation Through Philanthropy

Transforming a Devastated Island Through Philanthropy

In the Interest of Awesome

Fundraising from a Million Different Faces

Beyond Persuasion and Timing

The Art of Impact

Women’s Impact Initiative: Raising Awareness of Equity, Leadership, and Harassment in the Profession