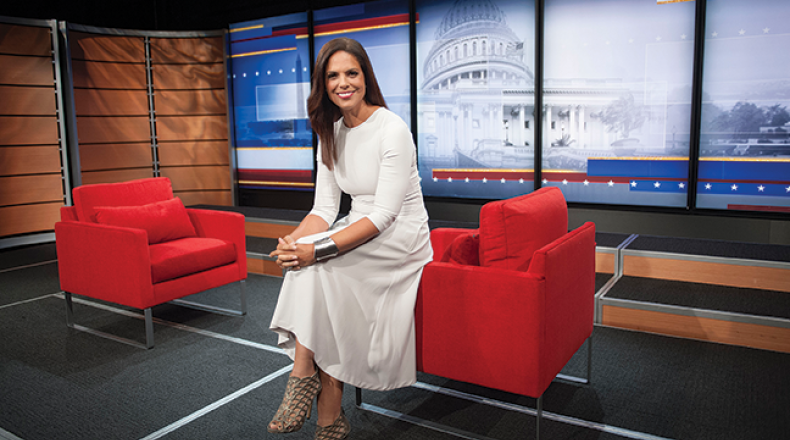 The road to global media stardom also shaped Soledad O’Brien into an ardent champion for people who don’t make the headlines.

We were spitballing some questions last week about what to ask you, and then we found that Forbes had asked all the good questions, including “What do you do on Sundays?” So I was going to ask what you do on a Wednesday.

Wednesday is my busiest day, actually.

All right! What do you typically do on a Wednesday?

Because I have to, I get up. I recently had knee surgery, so I get up and I am at my physical therapist at 6 o’clock in the morning, trying to get my knee back in shape, and then I go to the gym and work out, and then I usually have a crazy sprint of a day. If my boys have a soccer game, I drive out of town to go to their game, usually in horrific traffic, and then I have to hop on Amtrak to get to D.C. for my show, which tapes early Thursday morning. So Wednesday actually is my insane day.

How do you handle that versus when you were always “on” at CNN and other places?

It’s just different. At CNN, you were always potentially on. You needed the basics in a duffel bag so you could go straight from your office onto a plane. And that happened a lot, actually. I loved it, but it was sometimes very frustrating when you’d miss things. I was the worst class mom because “Hey, I’m not coming” or “I’m heading off to wherever” was not great. Now my No. 1 job is running a production company, which means you’re much more stressed. I have 11 people who I employ and must keep busy and working, so that’s 24-hours-a-day stressed.

What draws you to storytelling? That’s a lot of what fundraisers are trying to do now.

It’s funny—I’m really good at looking at other people’s stories and saying, “You guys are trying to sell this over here, but your actual story is this. Why don’t you use your authentic story?” Sometimes, it’s hard to see when you’re in the middle of it.

My husband and I started a foundation in 2005. We send girls to and through school, and even when we deal with these young women, it’s about storytelling. It’s having them understand the narrative of their life. That they get to build it right now, and other stories that have been told about them aren’t necessarily the real story. They get to be part of that story. You can change the ending, and all those things are very important whether you’re a fundraiser who’s trying to express the goals and mission of an organization or you’re a 20-year-old girl who’s trying to get through college when you’re the first in your family and you’re not even really sure that you’re doing the right thing. Both of those require very good storytelling.

Why was that particular cause important to you?

There was a better way to help young women in New Orleans get to and through school, and giving someone a chunk of money wasn’t ultimately really helping them. Sometimes, you would just cause people to have a lot of college debt. Here’s a girl: she’s great, [and] she’s got big dreams. Here’s a $5,000 scholarship. Well, that’s a lot, but it’s not enough. Even if you paid her full tuition, that’s not enough. You gotta have mentors and support and sometimes tutoring and sometimes cheering up and sometimes a little bit of yelling.

Was there something about working in the charitable sector and development that surprised you or challenged what you thought?

Most of our girls were girls in poverty and girls who didn’t have someone as I did when I was going to college who you could call up and say, “Should I take this class? Should I drop this class? I’m thinking about this. Here’s what I did on this test. What do you think?” Most of them had parents who were not gonna be particularly helpful on that front, even they were really, really supportive.

We send 25 girls at a time to college. Others would say, “What you really need to do is forget New Orleans. You should have a thousand girls that should be in New York City.” And I just remember thinking, wow, that’s not us. The first time it happened, I remember thinking, “Oh gosh, do I need to rethink this model?” And then saying, “You know what? This is the model that I like. I want to be personally involved with these young women. I don’t want to have a factory where we write somebody a check and we have no idea what their name is and where they’re in school and I personally couldn’t tell you about any of them ’cause I’d never get to meet them.”

Is there any advice you have for fundraisers?

I think I see two things. One is that they beat around the bush, and I really just like to be asked. “Here’s what I need. Here’s what I want. This is what it’s gonna accomplish, and here’s some information.” Just straightforward, because I think a lot of people are busy. We’ve gotten very much better in our dealings. That’s one.

And two, it’s the story. If you’re sending a girl to school, you’re not just helping Jane become a social worker. You’re helping her change her community because now she’s an employed single mom, which means that her child is more likely to go to school, and she’s also working as a social worker in her community, so she’s taking her experiences and, frankly, some of the really shitty times that she had and she’s gonna use those experiences to help other people do better and get better. That’s what people want to invest in.

It’s a little bit about being audacious. And people like that.

What are your thoughts about #MeToo and what women and men can do in terms of pushing women forward in different professions, into leadership roles, and gaining greater equality?

Probably the key word for me is “intention.” There are plenty of people who had anti-harassment rules in their offices; they just were never enforced because there was not really an intention for that.

What’s the intention? If you are trying to get women into senior leadership positions, then you start really digging into your strategies—what’s working, what’s not, measuring, analyzing, assessing, asking people. How do we move them into leadership? How do we make sure that our rules against harassment of both men and women are enforced? Most HR departments have them, but there’s a culture that doesn’t allow people to tell when something bad is happening to them.

You said in your book, The Next Big Story, “One thing that’s certain in this country is that not far around the corner from every ugly thing, there’s something really beautiful.”

Yeah, and I think we forget that a lot. It’s very easy to cover the people who are screaming racist remarks at people that are now captured on an iPhone than to cover the people who come to their defense or the people who just do good things. Even news doesn’t cover good things anymore. You just cover the bad and the drama. Occasionally, if there’s a national disaster, we’ll cover the help given people, but for the most part, the news is made up of really terrible things that happened and really bad people. I do think it becomes very easy to quickly forget that there’s actually a lot of really good people doing really good things. I see them all the time.

I’m always amazed at people who volunteer to work with us or donate money to us. And sure, it’s wonderful when a big donor comes in. That’s fantastic. But it’s also amazing when a person who has nothing to give you says, “Well, I have a little bit to give you, and I’d like to give it to you because I was that girl that you’re now helping, and your work resonates with me.”

You come across to me as relentlessly optimistic.

I have my phases.

I have four kids, so there you go.

We have a lot of hopes and dreams and goals for them, and they have too. Running a small company, you never know what’s gonna happen, and it’s not something I’d done before I left CNN, so learning on the job to do that well has been interesting and really exciting.

My scholars sometimes careen from some amazing thing that’s happened to “What do you mean you’re failing biology because someone slashed your tires and you don’t have the 150 dollars to get it fixed?” I just think life is what keeps you up at night and trying to make sure that you’re giving what you can to everybody who needs it.

So yes, I hope that we can move off the conversation about tone and tenor and discourse and white supremacy and racism and all these sort of hostile conversations and really get back to the work of the country. How do you make the country work for all people? That, to me, is what government’s supposed to do.

At some point, people have to realize the only way to really win a majority is going to be to figure how to solve issues for all people. The white men in midwestern America, the black women in inner cities, the Native Americans in North Dakota, the Latinos in Florida and New Mexico and Nevada—all those folks have political power, and you need to unite people in order to do well for the country. It’s not brain surgery.

Right. What project are you working on now?

We’re working on a documentary about college students who are hungry, who can’t eat, and it’s really an interesting project. There’s just so many schools now that put pantries on their campuses because the students can’t afford to eat.

What draws you to the documentary versus, say, an article or a piece you might’ve done for CNN

The way you’re most successful is when people get what you do, right? Sometimes, that means they have to sit in your life and say, “Wow, so this is what they’re doing. I think I get it. I see the challenges. I see where they’re frustrated. I see what they need the money for. I see where they’re going. I see the opportunity. I see some of the obstacles that are coming down the path.”

One final question: What are you most proud of in your career?

It’s never for me been about awards. I have a reputation of looking to help give the mic or raise the voices, elevate the stories, of people who are often ignored, and I’m really proud of that. I think that’s something I’ve tried really hard to do, and I think we do it well, and we give people their story without sugarcoating or making their story cheesy or cleaning it up.

The Other Side of Working from Home