Changes Ahead: It’s Still About the Relationships With Donors 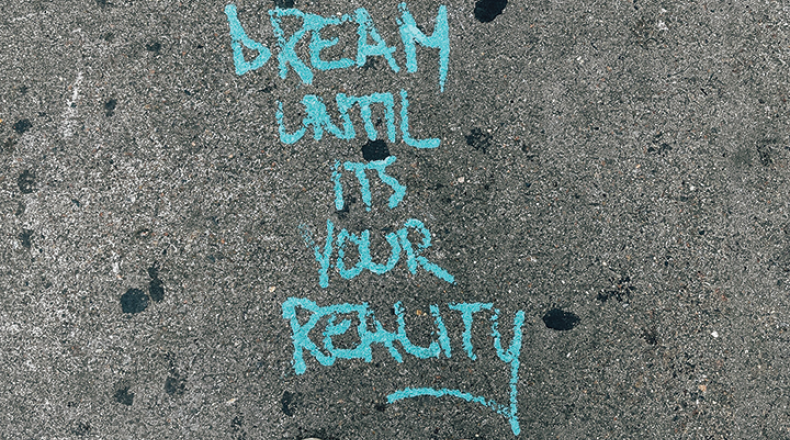 Thinking back to formal schooling days, classrooms were often laboratories of change and experimentation. Learning and trying new things were the fabric of the days. Some of that curiosity and opportunity for reinvention stayed. But as formal careers took shape, sometimes routines caused the days, weeks and months to blend into one another, with little opportunity for a paradigm shift.

Enter March 11, 2020, which National Public Radio described in a headline on the first anniversary of the COVID-19 pandemic as “The Day Everything Changed.”

At the root of fundraising and development work are the donors, who entrust organizations with their money and the belief that the professionals on the other side of the check will invest it in their passions to make the world a better place.

At the root of fundraising and development work are the donors, who entrust organizations with their money and the belief that the professionals on the other side of the check will invest it in their passions to make the world a better place. The following is a story of three donor relations professionals in higher education and how they seemingly went back to school at their own organizations to adapt and get uncomfortable with new best practices, and ultimately, the crafting of a new paradigm that may never truly settle down to a pre-2020 level.

Pressing Pause: The Initial Adjustment to the New Reality

Virtual events were not part of normal operations prior to COVID-19 for Brie Aguila, assistant vice chancellor for external relations at the University of Colorado Anschutz Medical Campus.

“We were probably a little paralyzed by history,” Aguila said, adding that the mentality before the pandemic was one of always engaging with donors in person. And then, that was suddenly no longer an option.

There were the initial bumps in the road, Aguila said, but the benefits quickly outweighed any risks or related anxieties. “I think as we started to actually grasp the virtual experience as a benefit, what we’ve seen is we’ve been able to reach a wider audience that don’t live locally,” she said.

Moving forward, while not every event will include a virtual component, it will at least be a part of the event-planning conversation. Donor-related events at her organization include fundraising luncheons, cultivation, and stewardship events, as well as educational opportunities for alumni engagement like the now-virtual Healthy & Happy Hour. While many of those events transitioned into other touchpoints, there is excitement as they look to return to some in-person engagement, Aguila said.

The results also speak for themselves: Aguila said dollars raised at her organization have remained consistent with pre-pandemic levels. “Previously, we never would have thought that you could have a meaningful engagement via Zoom or even a phone call,” she said, “but because that’s where we had to be, our development officers were seeing just as much—if not more—deeper engagement because there were no other distractions.”

“We were having people tune in who we’ve had a really hard time getting connected with in the past,” Aguila said. “We were able to meet them where they are. There’s a little less commitment from their side. It’s low-risk, so I think that there’s going to be a virtual component that won’t ever go away.”

“It was really intensive,” said Altamore, who is also the current president of the Association of Donor Relations Professionals, “but it was important because as we have now started to do more virtual events, we understand it is a very different process than a normal in-person event. It was a lot of learning opportunities for how to rework and rethink relationships, and the work itself in different ways.”

The Great Adaptation: Leaning Into Discomfort

Acknowledgment letters—a practice rooted in great tradition and expectations—were an area of paradigm shift during the onset of COVID-19. With limited staff time in the office, and sometimes inconsistent access to routine items like printers, paper and envelopes, how would the two to three business day turnaround standard be maintained?

Altamore and her team moved their birthday and anniversary cards to a virtual format. For example, one of K-State’s acapella singing groups recorded a song, and that video format replaced print birthday cards. The result was greater engagement with donors and alumni, Altamore said.

“The acknowledgment piece is just as much of a big shift that we had to make and were uncomfortable making, but have now found benefit from it,” she said, adding that her organization has also leaned more into using ThankView for personalized ecards.

The Great Re-Evaluation: An Opportunity for Reinvention and Creativity

It is an adage that has been oft-repeated over the past two years: Never waste a good crisis. Aguila’s team is currently re-evaluating its programs and projects with a critical eye toward what to keep from pre-March 2020, what to discontinue, and what to continue moving forward.

For Traci McBee Rowe, director of donor relations at Metropolitan State University of Denver, the last five years have been one moment of change-pivot-adapt-repeat. She was the first person hired in her role, with an opportunity to build her organization’s first strategic, baseline donor relations program. The first three years included significant leadership changes. By early 2020, things had started to reach consistency—and then the pandemic hit.

McBee Rowe’s annual scholarship celebration—previously known as the annual scholarship dinner—transitioned to an all-virtual event in 2021. (It was last held in person in 2020, just before the onset of the pandemic.) She knew she was keeping the gathering of scholarship donors and their recipients, “but I had to completely reimagine how I was going to make that happen,” McBee Rowe said.

She took the event that was previously one dinner with all scholarship recipients and all scholarship donors, and she broke it into eight virtual events that took place throughout April 2021.

“I reimagined the program while keeping that foundational concept of building relationships between the donors and the scholars,” McBee Rowe said. The experiment proved successful: The attendance numbers were consistent with previous years when the event took place in person. Students who had received privately funded scholarships were invited to participate in a compilation video shown at the virtual events, and McBee Rowe received about 50 responses.

“No pressure now,” McBee Rowe said, laughing, “because I have to try to figure out how to replicate that success and the engagement with donors. The emotional value of the compilation video was incredible, so that new piece of the event is something we will keep and will continue.”

Altamore is leaning into a major experimental change in her organization: Donor relations activities are shifting toward being data-driven first, with the heart-driven and emotional tie-in still a priority. Donor relations is working closely with the decision sciences, marketing/communications, and annual giving (known at K-State as “strategic solicitations”) teams in a collaborative spirit to make the transition. The paradigm is this: The collective minds determine which audiences need special attention, and then the plan is built around them.

“That has been so rewarding,” Altamore said. “It’s a much more collaborative approach.”

A mini-case study of the new process: In early 2022, annual donors were invited to an event prior to a basketball game. Attendance was strong, and the conversations were strategic about why the attendees were invited. Annual giving officers were invited to the table, and the related follow-up was also intentional. Within one week, several donors replied with gift increases, and they now reside in major gift portfolios.

“Change is going to happen. It is a question of whether you will allow the change to occur to you and your organization, or if you will drive the change for successful outcomes.”

“We’re really working to figure out, ‘How can we use data? What’s the data we have? If we don’t have the data, how can we get the data?’” Altamore said. “We’re still doing the warm fuzzies, but we’re using the data to drive them, so they’re becoming even more impactful.” 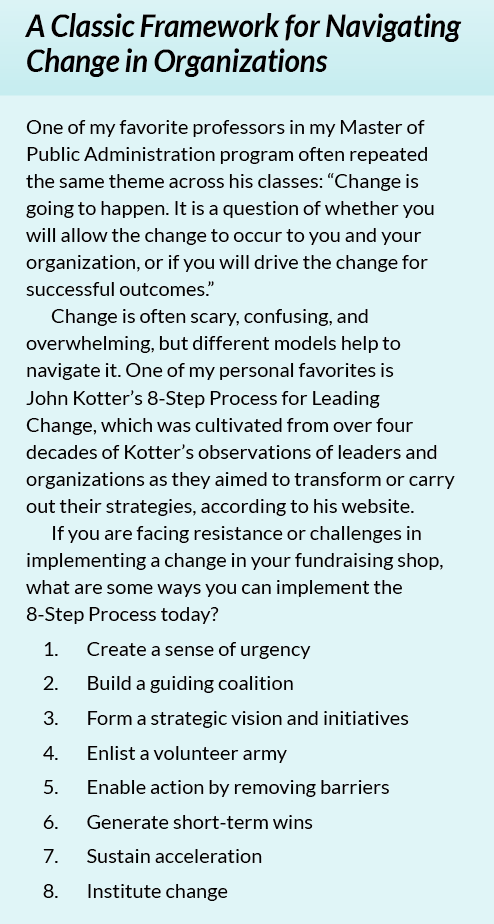 Two significant changes are also on the horizon for McBee Rowe: The first is her growing team, as Donor Relations goes from two members to four, some of whom will work in a hybrid work setting while others are now all-remote. McBee Rowe is learning a new reality in building job descriptions and crafting task assignments for her direct reports.

The second significant change is the pivot away from traditional giving societies, and a move toward more targeted and personalized donor communications regardless of giving amount. McBee Rowe described the change—which has full buy-in from all levels of leadership—as an adjustment of energies toward communications impact.

“For us, the ‘a-ha’ was really saying, ‘We don’t have to fabricate something new based on the dollar amount of gifts, but let’s just take the opportunity to be strategic in how we’re telling donors the impact that they have and share those gratitude messages regardless of the dollar amount they give,’” she said. “It definitely seems like a risk because it’s not traditional best practices, but we really are an institution that embraces risks and trying new things and figuring out what is best for this school and not for donor relations as an industry.”

Adrianne DeWeese, MPA, is assistant director of annual giving and donor relations at Kansas City University in Kansas City, Missouri, where she is responsible for all aspects of annual giving and stewardship. Adrianne began her career in community journalism, earning a bachelor’s degree from Kansas State University and a master’s degree in public administration from the University of Missouri-Kansas City. She is committed to quality donor relations at all giving levels and practices of sustainable fundraising.