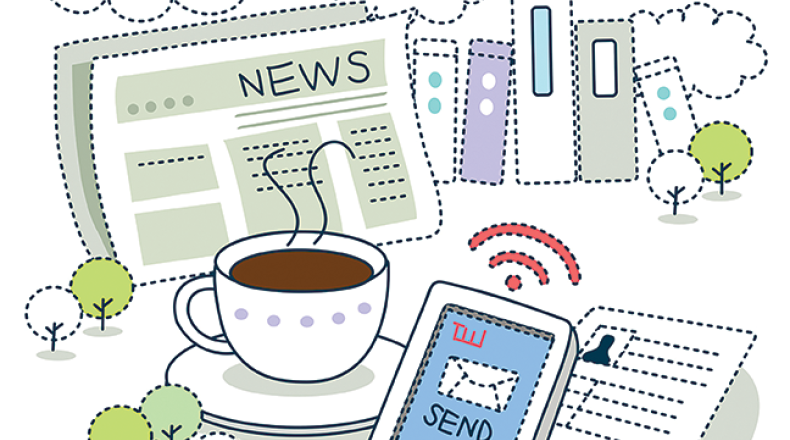 Several years ago, a brilliant copywriter named Jono Polansky (www.onbeyond.com) wrote an email that perfectly outlines the do’s and don’ts of public interest advertising. With his permission, we’re sharing it for the first time here.

Design per se can make or break an ad, but even if you avoid making your ad unreadable or unattractive, you still need to work from a clear strategy, tacitly expressed in copy and design.

1. Ask a question. Frequently, framing the headline as a question is a good way to engage the reader and put him or her in charge. Remember, effective ads are not about the sponsor; they’re about the reader. Good public interest ads erase the line between the personal and the political. Asking a question shows that you care enough about what people think and feel, not to lecture them or force them to buy into a conclusion before the conversation even begins.

2. Think telephone, not megaphone. Questions also quickly establish the “voice” of the ad, which is all you’ve got to simulate a conversation between one person—the advertiser—talking with another person—the reader. The late Arthur Godfrey was one of the first broadcasters to realize he wasn’t addressing a theater full of people. He was talking personably to one person sitting by the radio, in the privacy of his or her own imagination. This was a revolutionary insight 70 years ago, yet it’s often ignored by public interest advertisers who act like they’re holding a megaphone instead of a telephone. Yes, you’re often trying to build social movements (or the feeling of one). But every community is made up of individuals. Good ads welcome individuals into a community of action, one by one. FDR’s fireside chats worked on this principle, which is all about trust and intimacy and, finally, affinity. Community organizers know this stuff upside down and backwards. So should communicators working on other scales.

If framing the headline as a question introduces too much doubt or the subject is inappropriate for a relatedness approach (e.g., using or implying the word “you” in the headline), then present a headline that claims as much moral territory as possible. Many good ads redefine an issue in fresh terms to overcome fatigue and alienation. Instead of competing, reacting or defending, they often announce a new category. The ad itself should be thought of as an event—naming names, being timely, acting like “news.”

Readers don’t passively observe your thought; they actively construct their own as they go. Good ads abet and reward this activity. 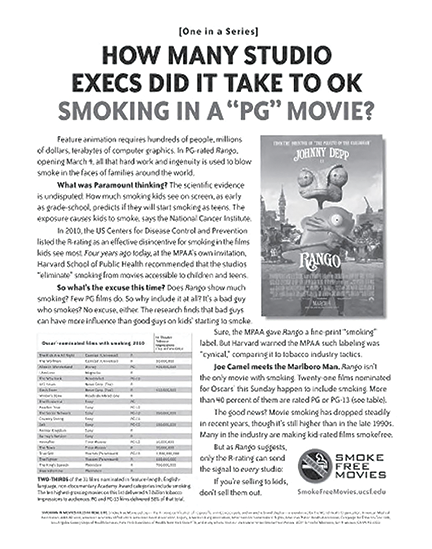 3. “Joe Camel meets the Marlboro Man.” See the ad on page xx, which ran in film industry trade journals. One in a series (www.smokefreemovies.ucsf.edu) designed to end the long collaboration between Hollywood and Big Tobacco, the ads investigate, report and hold people and companies accountable. Leading up to this ad, public health experts confronted Paramount to learn why this kiddie-rated film (Rango, 2011) had been tagged for smoking—then ran the ad in the trade press 10 days before the film actually opened. Message: No “suit” is safe. Decision makers will be held publicly accountable.

4. How to hold on to your reader. Beyond making sure you have a good, true story to tell, be aware of how readers decide to stick or go. Give the reader multiple entry points into the ad (skyhead at the top of the page, main headline, picture caption, signature tag, lead, pull-quotes, to name a few such portals), and clearly map the route between them. Three or four landmarks not only give you several nuanced chances to interest a reader but they also encourage the reader to scan the whole page while deciding to stay or leave (having invested some time, they’re more likely to spend more). At their best, these elements act like a simple connect-the-dots drawing. A bit of unresolved tension between the main headline and primary visual also invites the reader to fill in the blank and be rewarded for it.

Readers will bounce off ads that are too literal or complete: “Got it. I’m gone.” Incomprehensible headlines or mysterious visuals, on the other hand, strike readers as more trouble than they’re worth—and risk making them feel dumb: “What’s the payoff? You’re wasting my time!” The balance between leaving an ad too wide open and shutting it up too tight is what good advertising is all about, millisecond by millisecond: “Well, that was interesting for me. I wonder what happens next … ” Readers don’t passively observe your thought; they actively construct their own as they go. Good ads abet and reward this activity.

Always, always, give the reader something to do. Make the action direct, simple and satisfying. Action cements the connection between reader and issue. It is also, on its face, empowering. Exciting emotion without providing an outlet is a tease, leaving the reader more frustrated, cynical or alienated than before.

In TV advertising and branding, writing often seems to take a backseat to the visual. But in print, the writing in the headline and the body is obviously crucial. All readers are volunteers. They’ll take any excuse to disengage and turn the page. A lot of public interest advertising mistakenly adopts a mass marketer’s model—big image, clever headline, two lines of copy: “Look, Ma, I’m in advertising!” Instead, examine the implied dialogue with the reader in effective direct mail and in long-copy ads from the 1920s to 1960s and in unhip but results-oriented, direct-response ads today. Looking for commitment? Invite the readers to spend some time making your issue their issue. That’s the beginning of an authentic, long-term relationship. (Incidentally, those last three sentences are an example of how implied dialogue works in copy.)

5. Who is the real audience, and what do they need to hear? The key question in any ad strategy is, “Whom do I need to talk with around here?” Public interest advertising is directed at the public or a subset drawn to the newspaper or magazine you’re running in, but its ultimate audience may be a mere fistful of cold-blooded policymakers. They’ll read the ad—not to be convinced on its merits—but to judge if an issue has attracted enough money and expert advice to become a political factor. Has redefining an issue broadened its appeal? Does the message give an issue’s champions new and more powerful language? Does it alter, or threaten to alter, the political calculus? Many good public interest ads are designed to reach very different readers, the amateur citizen and the professional politician, simultaneously. (Your credibility with the latter depends on showing you know how to move the former.) On issues that have ground to a standstill, it saves time to enlist professionals who, oddly enough, think about traction constantly and have gotten people out of ditches before. Revving up the motor, without a good plan, will just deepen the rut. Advertising isn’t rocket science, but you do need to know how to shift gears. And when.

6. Design matters. Using one ad to reach such distinct audiences demands resourcefulness. The ad-maker must be acutely aware of every factor, from the day of the week the ad will run to the typography, which is the music of the song a good ad sings. An ad’s page placement and timing are as important as its message, voice and composition. Bottom line? If you don’t have much, use everything you’ve got consciously, purposively, strategically. Dolly Parton said it best: “Find out who you are … and do it on purpose.” Research can help you find out where your readers start from, so you can accompany them on their journey of discovery from Point A to Point B, six inches away but much closer to you.

Because of the extra (and unjustifiable) cost, full-bleeds and color are out of reach for most public interest advertisers. If you think you need full color to compete with commercial ads, your readers may well view you as just another consumer item. The point is, you’re not. Black-and-white has an aura of documentation, which is why it’s good practice not to manipulate photos; doing so suggests the truth is insufficient. The key to good acting is to look like you’re not acting. If you’re limited to black-and-white, then be true to its nature, and make the most of it. Some concepts simply won’t fly in monochrome, but the right print concept doesn’t need color.

Use print to do what print does best: explain and empower. It’s a thoughtful medium, in which the emotion derives from quiet outrage, satisfaction in seeing wrong undone, feeling more competent and effective. Every medium has its particular exigencies. TV spots don’t work like PowerPoint presentations. Brochures don’t work like radio spots. Be aware of what each medium does well. The simpler the ad, the more precise the strategy must be. The more precise the strategy, the simpler the ad can be. A picture may be worth a thousand words, true, but the right word might be worth even more, because it can determine what the reader sees in any picture.

7. Make it personal. Show the reader respect. Treat each one as an intelligent person. Talk with him or her (not “to them”) as if he or she shares your basic values. Give each a chance to act on deeply held instincts about what is fair, just, right. All communication is a transaction of time. Want a reader to think or act? Then offer a fair trade—by showing honest respect, delivering pertinent information and making every word and image count. Respect is the rarest commodity in advertising driven by marketing interests that exploit our primitive anxieties. Authentic advertising in the public interest never treats the reader as a target to be manipulated or as a child to be distracted but as an aware and critical equal constantly making perfectly understandable choices about where to spend his or her time.

The best advertising is to do what you do, out loud, vividly, concretely, in the manner befitting the medium available to you. Action is all. Advertising is simply a way to involve more people in the action than you have the time or opportunity to reach face-to-face. Good advertising on any subject, in any medium, is a skillful scaling up of that one-on-one conversation and shared experience you and your reader both want so much.

Susan Alexander lives in San Francisco and is a communications consultant for nonprofit organizations.

The Other Side of Working from Home