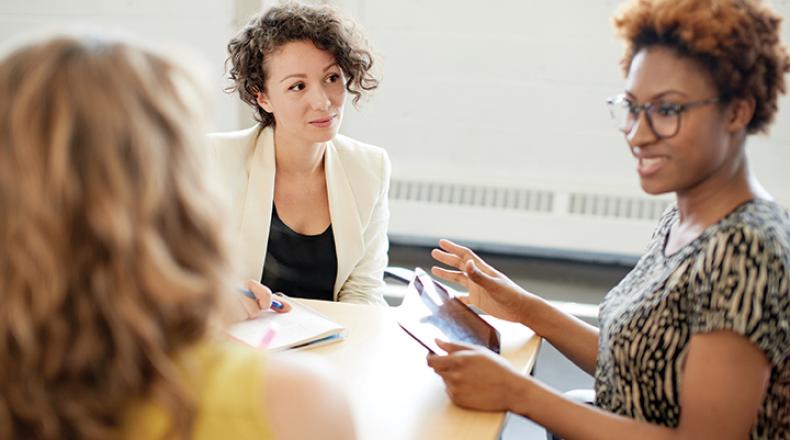 In late 2021 and into the first quarter of 2022, Danisha Bhaloo-Shivji, CFRE, spoke with women of color in the fundraising sector about how they got their start in fundraising. This series, called “Falling Into Fundraising,” (which can be found on the AFP website) illuminated the challenges women of color still experience daily as fundraisers and highlighted the need to talk about fundraising as a viable career option as early as high school—if not before. This article serves as a compilation of the project, capturing some of the key points learned throughout this experience and steps that need to be taken to welcome the next generation of women fundraisers into the field.

As I write this article, my two-year-old daughter is eating her dinner and watching a music video of “Surface Pressure” from the Disney movie Encanto. I listen to the lyrics, and they resonate with what this article is about—women fundraisers feeling the pressure of trying to do it all.

Over the past year, as a member of AFP’s Women’s Impact Initiative (WII) Committee, I’ve had the opportunity to interview 10 racialized women fundraisers from different parts of North America. There were several takeaways from each of these interviews, and I encourage you to read and watch them when you have an opportunity.

While there were several differences in the experiences and skills among these remarkable women, one thing was very clear—none of them planned for fundraising to be their career of choice at a young age.

While there were several differences in the experiences and skills among these remarkable women, one thing was very clear—none of them planned for fundraising to be their career of choice at a young age.

I was not surprised. In fact, I began this project with the suspicion that I wasn’t alone in this experience. In high school, I never considered fundraising, or any career in the philanthropic sector, as a choice. Don’t get me wrong, philanthropy was not a foreign concept to me. My family has been giving back to the community for generations—it’s ingrained within our religious values and culture. In high school, I began volunteering for a local organization my mom found for me—one across the street from her office so she could keep an eye on me. I was also a direct recipient of our local Big Brothers Big Sisters, Food Bank and United Way organizations—having lived in poverty with a single mother who did her very best to raise my sister and me. I was grateful to the social impact sector. But I never considered a career in this field, especially as a fundraiser.

All of the women I chatted with fell into their careers through the very aspect of volunteering for an organization they loved or being impacted directly by the cause they are now helping to lead. One fundraiser I spoke with began a second career working with a cancer research foundation after battling cancer herself. Another said she wanted to be a doctor at a young age, and then realized that her broader purpose was to be a helper to others.

Highlights From My Conversations

These women shared their successes with me. One told me how having a strong female leader as president of the organization motivated her to move ahead in her career. Another shared a story about how she was driving on the highway and came upon a car accident. The helicopter that came to take the victims was a result of her team’s fundraising efforts.

They also honestly and vulnerably shared their challenges, from having hard conversations with donors, to being the only woman in the room and being mistaken for the “caterer,” to giving a presentation and having a group of men get up and leave. Being a woman in this profession has the same but unique challenges as being a woman in other professions. Feeling unheard, not having a seat at the leadership table, multitasking, high expectations from others, and balancing career and family were some of the things women I spoke to experienced. Over the last two years, the pandemic didn’t only disproportionately affect women in fundraising—it was a widespread issue that impacted women in nearly every sector. In the social impact sector, however, there was often the added obstacle of continuing to help the most vulnerable while also managing your own mental health and family responsibilities.

We talked extensively about the aspirations for their careers in fundraising and philanthropy, but they also spent a lot of time sharing what they hoped the next generation of racialized women fundraisers would be able to achieve. One wanted to directly help young women in developing countries realize that fundraising could be a career and how to feel confident when asking for money for those much-needed social support areas. Another said she would like to see more inclusivity for parents in the workforce, as parental leave benefits in our sector are abysmal.

Let’s take time to reflect individually on what we can do to diversify the profession as we think about building our own teams and planning for our own succession in each of our roles, whether you identify as a female or not.

Some had very tangible ideas that can be implemented today—before we welcome the next class of (women) fundraisers into our field. Some of those ideas included:

Let’s take time to reflect individually on what we can do to diversify the profession as we think about building our own teams and planning for our own succession in each of our roles, whether you identify as a female or not.

Thank you to the women who participated in the 2021/2022 Falling Into Fundraising Series:

Later this summer, Danisha will begin a new series centered around the mental load of motherhood. If you’re interested in doing an interview, please contact Taryn Gold, AFP’s vice president of chapter engagement, at taryn.gold@afpglobal.org.

Danisha Bhaloo-Shivji, CFRE, works as the development and communications manager with Boys & Girls Clubs Big Brothers Big Sisters of Edmonton. In a volunteer capacity, Danisha is the chairperson of the Social Wellbeing Advisory Committee for the City of Calgary, a member of AFP’s Women’s Impact Initiative and a board member for United Way Centraide Canada. She also sits on the local United Way of Calgary’s Leader’s Cabinet and is the co-chair of Women United with United Way of Alberta Capital Region.