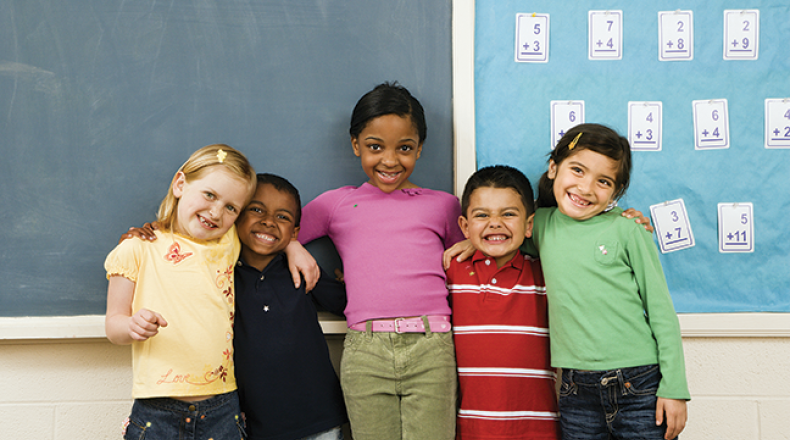 Despite demonstrating many of the best national markers of high-quality education, Minnesota is struggling to overcome some of the worst achievement gaps in the country. These gaps stem, in part, from a shortage of quality childcare and education opportunities for children statewide. Research has shown the importance of early education to a child’s readiness for kindergarten and later school and life success. At present, it is estimated by the recent A Roadmap for Action study that almost 80,000 Minnesota children do not have access to quality, licensed childcare.

Achievement gaps pose some of the most complex, difficult and urgent public policy challenges our communities face. Successfully addressing challenges of this scale requires radical change in our entire education system. This means that the “usual stakeholders” need to step outside of their traditional roles to think, interact with each other and define success differently.

In 2016, the Bush Foundation, Think Small and Generation Next did just that. Together, they embarked on an innovative, three-year partnership to improve the number and performance of childcare programs in two of Minnesota’s largest and most diverse cities. These organizations not only exceeded their goal by almost 400 percent, they also learned that it is possible, under the right conditions, to eliminate the gap in early education opportunities for young children in these communities.

The key to their success was relatively simple. It was the size, duration and structure of the funding that led to the partnership exceeding its goal of creating new, high-quality childcare slots in Minneapolis and St. Paul—despite encountering an unexpected and unprecedented childcare closure crisis.

Bush Foundation is a leading grant-maker in Minnesota, North Dakota and South Dakota, that for over six decades has funded creative, community-based problem solving. The foundation encourages grantees to “think bigger and think differently” about what is possible in their communities and generously funds organizations addressing community issues in an inclusive, collaborative and resourceful way.

Generation Next is a coalition of civic, business and education leaders from across Minneapolis and Saint Paul dedicated to closing educational achievement gaps. Its mission is to harness the community’s knowledge, expertise and action to ensure that every child can thrive. Its model is to use rigorous data analysis and community engagement to identify what works and replicate the most promising practices.

Think Small is a 501(c)(3) organization founded in 1971 to advance quality care and education of Minnesota’s children in their crucial early years. It has become a leading voice for equity and universal access to high-quality early education as an essential foundation for every child’s personal success. Its mission is to work collaboratively on community and state-wide issues involving early childhood through policy development, advocacy, evaluation and program piloting.

A Partnership Built on Trust

The Bush Foundation’s “trust-based” approach to the partnership with Think Small and Generation Next was fundamental to the project’s success. This mindset shaped how the foundation viewed its own role, valued each partner and chose to structure its funding.

The Bush Foundation trusted and believed in the expertise of its partners. Foundation staff valued Generation Next’s knowledge of and approach to issues related to the educational achievement gaps in Minneapolis and St. Paul, and they perceived Think Small to be the expert in early care and education. As a result, the Bush Foundation gave the partners the latitude necessary to find and scale solutions to the region’s early education opportunity gaps.

Rather than insist on the implementation of a particular course of action or specific array of services, the Bush Foundation encouraged the partners to focus on the change they wanted to see. With a flexible, multi-year grant and a single, end-of-project goal—to increase the number of high-quality slots available to children in Minneapolis and St. Paul—Think Small and Generation Next launched the Pathways to Quality (P2Q) initiative.

The primary goal of P2Q was to expand access to high-quality early education for a minimum of 1,700 children.

The primary goal of P2Q was to expand access to high-quality early education for a minimum of 1,700 children. To achieve this goal, the Bush Foundation provided $3 million in flexible support over a period of three years. The foundation kept its focus on solutions to disparities in early education, holding the partners accountable only for the outcomes they generated through P2Q.

At the outset, the partners defined a proposed course of action for increasing the number of high-quality childcare slots. The Bush Foundation placed few restrictions on how the grant funds were spent because they trusted each organization’s expertise and record of achievement. This “what, not how” approach removed disincentives for Think Small, the on-the-ground partner, to push boundaries and allowed the agency to adjust services, create new program supports and change course as necessary in order to achieve the desired outcome of P2Q.

Additionally, the Bush Foundation sought to ensure productivity, or progress toward the goal, without creating burdens or extra hurdles for either grantee. To this end, the foundation convened quarterly meetings with all partners to build trust and a common sense of accountability. In these meetings, each party would share their experiences over the period, talk through the challenges that had emerged and formulate new approaches. At year-end, the foundation did not require extensive reporting, but instead asked Think Small and Generation Next to document how the funds had been spent, the lessons learned over the previous year, the changes they had instituted and the cumulative impact of P2Q’s implementation.

The Pathways to Quality Project

Pathways to Quality offered childcare providers across the Twin Cities an array of supportive services to sustain their businesses and effectively address the needs of the children in their care. The P2Q program focused on children with high needs and providers serving culturally diverse children. It was designed to allow each participant to choose their path to success, selecting the tools, trainings and one-on-one coaching options they needed to achieve their professional goals.

Depending upon their priorities, childcare providers were able to choose from a range of opportunities, including participation in learning communities with others facing shared barriers, individual coaching on best business practices, training on social and emotional development issues and/or early literacy development.

Minnesota’s early learning community was dramatically changed as a result of the Bush Foundation’s grant and the successful implementation of P2Q. Access to educational opportunity was greatly increased, Think Small learned what was required of it to effect change at a population level, and the partners were able to prove the validity of “trust-based” philanthropy as a tool for systemic change.

Over the three years of the grant’s duration, a total of 6,536 high-quality early education slots were added to the communities of Minneapolis and St. Paul. This was almost four times the original goal established by the partners and a significant contribution toward equalizing early education opportunities in these cities.

During the course of the project, an estimated 30 percent of family childcare businesses in Minnesota closed. Yet, childcare providers participating in P2Q were three times less likely to go out of business than those not receiving support. The support also made it six times more likely that providers would get a quality rating for their program.

Based on the success of two specific support offerings of P2Q—peer group trainings for program staff and program quality rating retention incentives—the state of Minnesota has now funded similar support for all childcare programs across the state.

In addition, Think Small was transformed as an organization. The singular goal and flexible structure of the grant gave the agency’s leaders the time, space and money to think differently about their role and the purpose of Think Small’s work.

For the first time, they had the latitude to envision and explore new ideas for reducing the opportunity gap, to ask more questions about what was working or not working and to understand the reasons behind a program’s success or failure. They were challenged to move beyond program administration and to focus more intently on finding and scaling solutions to the state’s educational disparities. As a result, everything was put on the table and nothing was sacred in pursuit of the grant’s goal to increase the number of high-quality early education slots.

To support its new culture of entrepreneurship and innovation, Think Small adopted the Results-Based Accountability (RBA) model. Use of this model has allowed Think Small to clarify the ways in which it can be most impactful in its efforts and become an even stronger advocate for change in the early education arena. Through RBA, the organization has learned how to vet programmatic assumptions, identify progress measures and better use data to drive decisions and create new value. The data-based approach of RBA is now the new normal for Think Small and drives the organization’s continued efforts to help ensure that all children in Minnesota are ready for kindergarten.

Additionally, the grant’s success validated the efficacy of trust-based philanthropy as a much-needed approach to solving our society’s most pressing and persistent problems. It proved that philanthropy in this way, at this level and with this mindset is required to support the partnerships that create and sustain the innovation capable of identifying and scaling change.

Kim Snyder is founder of the Excelsior Bay Group, a fundraising and strategy consulting firm that works with nonprofits across Minnesota to maximize their impact on and benefit to the communities they serve. Barbara Yates is president and CEO of Think Small, a Twin Cities-based nonprofit focused on advancing early care and education. She is a recognized leader in the field with more than three

decades of professional and community service aimed at improving Minnesota’s systems for young children. Kim and Barbara have worked together for over 10 years to promote philanthropy as a catalyst for scaling innovation in the early care and education arena.