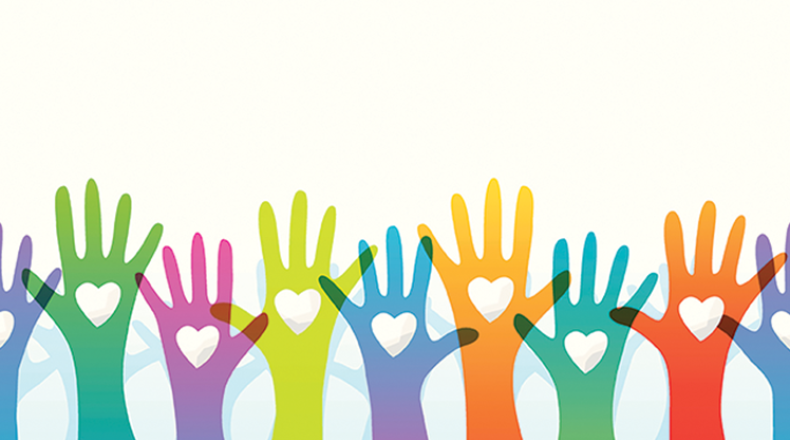 Major-gift philanthropy plays a hugely important role in our sector. How much so? According to Coutts (http://philanthropy.coutts.com), in 2013 almost $17 billion was given in million-dollar (or greater) donations to support nonprofits throughout the United States. Such figures are impressive, but relatively little is known about the nature of the organizations that receive such gifts and the critical factors that must be managed to drive successful major-gift fundraising.

A new study, Major Gift Fundraising: Unlocking the Potential for Your Nonprofit, sheds light on these issues, focusing on nonprofits with total income of $10 million or less. Interviews with fundraising leaders were conducted through a large-scale survey administered digitally through the Qualtrics platform. A total of 662 completed questionnaires were received from a wide variety of different categories of cause. The findings provide a window on the practice of major-gift fundraising and highlight the critical role that leadership can play, even in small organizations, in obtaining major gifts.

First, it was necessary to identify what the sample regarded as a major gift. As you may expect, there was considerable variability. The mean gift was $25,000, the median was $5,000 and the mode (the most frequently cited value) was $1,000. While the nonprofit sector tends to track and celebrate gifts of six figures or more, the reality for the organizations in the sample is rather different. Organizational leadership must therefore manage their expectations about what can realistically be achieved through a decision to invest in soliciting “major gifts.”

Furthermore, it was clear that expectations must be managed with respect to the return on investment this form of fundraising may generate, particularly in the short term. Leading fundraising consultants have long advocated that organizations need to be in major gifts for the long haul, since it takes considerable time to identify appropriate prospects, cultivate relationships with them and then wait for the right project to appear that would be genuinely meaningful for a specific individual. Pushing fundraisers to achieve early results can result in not only lower-value gifts than otherwise would have been the case but also significant levels of donor dissatisfaction. At the same time, organizations prepared to wait must also recognize that their short-term financial performance will be affected by that decision. As staff members focus on developing relationships, they will not be engaged in other, more immediately profitable forms of fundraising. The process of relationship building takes considerable time and resources, and the study shows that every additional new donor in the acquisition pipeline is associated with a fall in revenue of around $300. That may not sound like a huge sum, but against the gift values cited above, it is highly significant.

Of course, the beauty of taking the time to build relationships and understand the projects that will be intrinsically and deeply motivational for supporters is that the eventual returns are excellent and typically on the order of $10 for every $1 of investment. Major donors, if properly stewarded, will rarely make just the one gift, and experience says that their first gift is rarely their largest. Study results show that each additional donor being stewarded after his or her first gift is associated with an additional $2,200 in income. So, while major-gift fundraising should rightly be seen as an investment, the ultimate returns it can generate make the investment very attractive indeed.

There are, of course, some caveats. Organizations need to have a pipeline of donors who can make a gift at the requisite level. In the survey, paid members of staff with responsibility for participation in major-gift fundraising appear to have a mean of around 20 donors in their portfolio. This figure is much lower than one might expect in larger nonprofits, because larger nonprofits have dedicated major-gift officers.

As Table 1 shows, small organizations with donated income of less than $1 million have an average of two members of staff engaged in some way with major gifts. However, when the time spent by these individuals and in the aggregate was analysed, it equated with only 30 percent of one full-time role. When looking at organizations earning between $5 million and $10 million, around three members of the team were involved in major-gift fundraising. Even here, the time spent equated to a little less than one FTE (full-time equivalent).

The short-term nature of the criteria used to evaluate these personnel was notable. As shown in Table 2, metrics such as dollars raised, numbers of new gifts, gift size, etc., predominate. None of these, however, are indicators of the long-term health or success of a major-gifts program. Although it is understandable that boards would track overall income, it is not understandable that they would neglect the drivers of future income. Fundraisers, like any other class of employee, will focus on behaviors that deliver to the metrics demanded by their managers. If those metrics are not aligned with the drivers of future success, the long-term sustainability of the program is in jeopardy. Pipeline measures must therefore be included in the nonprofit sector’s metrics.

It is also worth noting that commercial marketing managers are now routinely rewarded for how satisfied they make their customers feel. Corporate executives recognized a long time ago that “very satisfied” customers have a substantively higher lifetime value than those who are merely “satisfied.” The nonprofit sector seems to have been particularly slow to wake up to the reality that the same dynamic applies in the relationships charitable organizations have with their supporters.

The leading professionals interviewed for the study all stressed how important it is that board members play an active role in supporting their major-gifts team. It was not suggested that they necessarily need to participate in asking others to support the organization but rather that they facilitate the process by being prepared to act as ambassadors, meet with donors and help engage them with the organization. The survey results were therefore disappointing.

Respondents were asked about the extent to which they agreed or disagreed with a series of attitudinal statements, where 1 = strongly disagree and 10 = strongly agree. The results, as reported in Table 3, indicate that most board members do not play an active role in fundraising and that the various departments in organizations do not work together as well as they might to facilitate and ensure fundraising success. 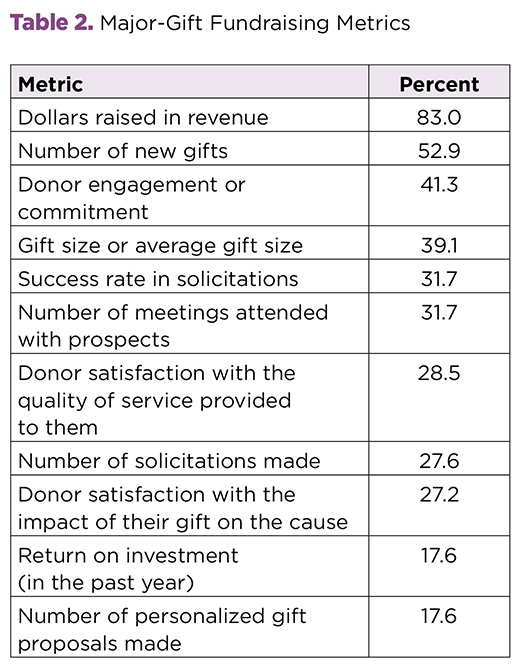 This is important because many of these factors correlated highly with the level of major-gift fundraising success achieved, particularly for the larger organizations in the sample.

The survey also revealed that boards need to adequately invest in their fundraising teams. Individuals who stay longer on the job raise significantly more gifts. Given that turnover rates in the profession of fundraising as a whole are high, this represents a significant challenge, particularly in smaller organizations where salaries may not be competitive. It is thus essential that nonprofits develop a plan to retain and develop the commitment of crucial fundraising staff.

The role of training and development is critical. A strong correlation was found between the range of training and educational opportunities afforded to staff and overall fundraising performance. Each additional form of training/education is associated with an increase of $37,000 in income. While many nonprofits will not invest in staff development because they fear individuals will leave and the monies will be wasted, survey results highlight how mistaken this approach is. Formal education and certification opportunities appeared to have the strongest relationship with fundraising success. While attendance at local events/conferences can be a helpful component of a staff development program, nonprofits would be wise to also consider providing support for more formal forms of study, such as a certificate or diploma in fundraising and/or a certification, such as the CFRE. 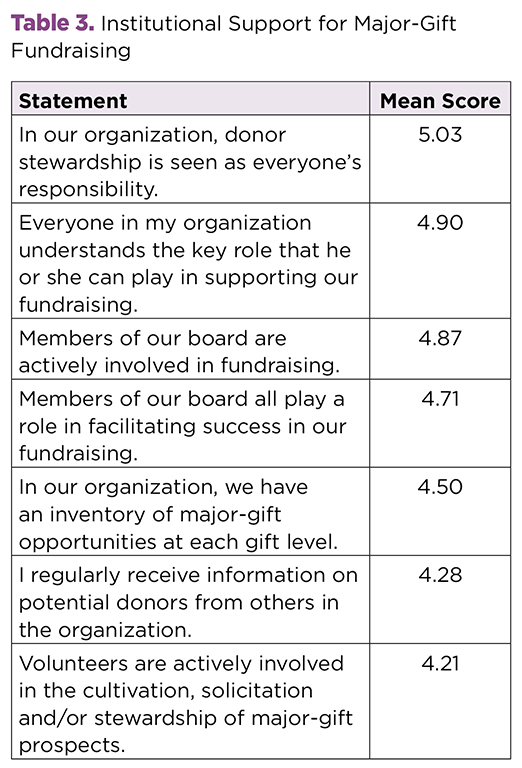 Finally, the study found that having appropriate information technology (IT) systems in place is another highly relevant factor driving performance. This was linked to success in the number of major gifts received. An investment in database technology facilitates the identification of prospects and the process of stewardship that may be employed with existing supporters. It also can play a role in creating an “institutional memory” to safeguard a nonprofit against the loss of key personnel.

In aggregate, the results offered considerable insight into how boards at even smaller nonprofits can play a critical role in driving the success of a major-gifts program. Fundamentally, they need to understand the important role that they personally can play in the process by developing a culture of donor centricity and giving active consideration to how they will interface and connect with donors. They also need to actively consider how to manage the factors now known to drive success, reorienting the organization around longer-term measures of performance and giving adequate consideration to key investments, in both their team and the technology that will support them.

We would like to thank the sponsors of this research project: Bloomerang (https://bloomerang.co), Donor Search (www.donorsearch.net) and the Support Center for Nonprofit Management (http://supportcenteronline.org).

For the 13-page summary report and the 68-page full report (including the literature review), visit http://masteringmajorgifts.com/report.

Adrian Sargeant, Ph.D., is director of the Centre for Sustainable Philanthropy at the University of Plymouth (www.plymouth.ac.uk/schools/plymouth-business-school/centre-for-sustainable-philanthropy) in the U.K. Amy Eisenstein, ACFRE, is a speaker, consultant and author of Major Gift Fundraising for Small Shops, Raising More with Less and 50 A$ks in 50 Weeks (www.amyeisenstein.com). Rita Kottasz, Ph.D., is a research consultant on behalf of the Centre for Sustainable Philanthropy and a marketing lecturer at Kingston University in London (www.kingston.ac.uk).

Falling Into Fundraising: A Career That Makes an Impact