Tapping Your Talents: Gratitude and Giving — Say “Thank You” Often 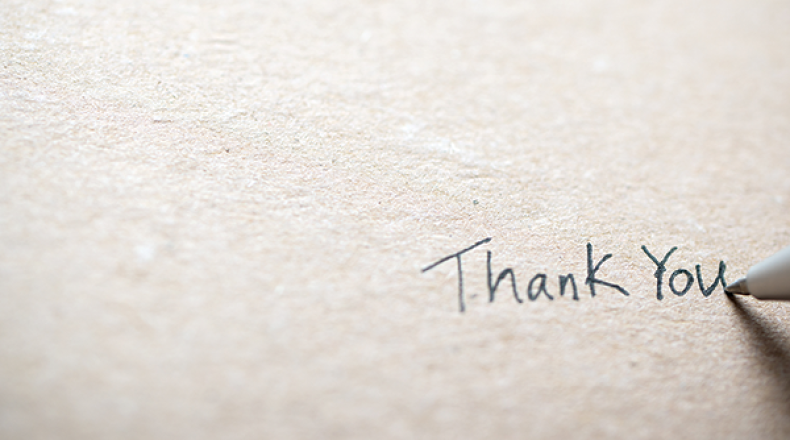 The keys to successful fundraising are gratitude and stewardship.

You’ve learned to ask for the gift. You know how to write the tax-donation-receipt letter. But have you learned how to say, “thank you?”

Many development professionals think that once they send the traditional form letter thanking donors—within the all-important 48-hour window—they have done their part.

But have you wondered why donors gave just one gift? Have you ever thought, “We have given our donors tickets, gift bags, T-shirts, mugs, and many different tchotchkes, yet we still can’t get the response we want from them?” Or, when you ask for another gift, do donors make excuses and then give a larger gift to another organization? Did you think the donor liked your organization? Did you think they liked you? So, what went wrong?

Treat your donors’ money like it is your money. Would you spend your hard-earned money on your organization? Would you give to the cause that you represent?

Our donors are just like us—people who have worked hard for each dollar and who have many competing requests for their philanthropic funds. When you spend your own funds, don’t you feel good when someone acknowledges you and thanks you for your support?

Donors want to know you respect and appreciate their hard work and that you will treat their hard-earned dollars with care. So, what does that mean? Well, ask yourself, how many times can we say “thanks?”

Here’s an example. When donors ask for their money to be targeted toward a specific project, I send them the details associated with that gift. Their restricted gift is monitored to make sure each dollar is used exactly the way we said we would use it. I send copies of the receipts for all purchases associated with their gift, including documentation of actual bids, so they can see we got the lowest price possible. In cases of unrestricted funds, I send similar annual reports for all costs related to the work environment, including overall compensation information, so they understand the costs associated with running the organization.

I think back to an experience I had some years ago while working for a performing arts organization. I had a donor who gave our organization a gift to be used toward a performance. Unbeknownst to me, the donor was under the impression that the $20,000 gift would pay for the show. After the performance was complete, I sent the donor copies of all the bills and expenses. To their astonishment, the performance cost was well over $150,000. They shared with me that they had no idea that any performance could cost that much.

After seeing and reviewing the actual cost, this donor recruited several friends to help with the cost of other performances. Instead of giving the organization another $20,000 check, which would have been wonderful, future checks from this donor were $50,000. The donor also persuaded two friends to each give $50,000. That donor became an advocate who understood much more money would be needed to be a significant help to the organization.

Donors want to know you respect and appreciate their hard work and that you will treat their hard-earned dollars with care.

If I had sent the standard thank-you letter, this donor could have continued believing that the $20,000 had paid for the entire show. By presenting a stewardship report showing how the funds were used, along with a customized and personalized thank-you note from our CEO and board chair, the donor got to see a much clearer picture. The donor and the donor’s friends were so impressed with my willingness to share the full accounting of how their funds were used that they not only wrote larger checks, but they also asked their friends to join them in supporting us as well.

Many times I take pictures of all items purchased for the year and put together thank-you packages to all our major donors so they can see that their funds were used as they intended. It is imperative we get the traditional tax-donation letters out within a 48-hour window, but it is just as important to give the donors an opportunity to truly make a difference by saying thank you in nontraditional ways.

A colleague and I were talking a few years ago, and he expressed concerns about a particular donor. He stated that this donor had stopped giving after many years of significant five-figure gifts. As a newcomer to the organization, my colleague had requested a meeting with the donor, stating as his purpose a desire to thank her for her past support. He planned to gather information on why the donor had supported the programs, hoping this would help him understand more about what this donor felt was important about the mission.

When he met with the donor to review the data about the contributions and measures of impact from her gifts, the donor waived a dismissive hand and stated why her support had stopped. She said that, in all her years of giving, she’d never heard how her gifts were used or what impact they had had on the organization’s programs. In fact, most of the time, all she received was a two-line form letter announcing the gift receipt for tax purposes, with a one-line P.S. at the end saying, “Thanks for your generosity.”

The donor shared that she had taken a small inheritance from her family and had created a corporation that impacted millions of people on three continents. She knew she had helped people live better lives and knew from letters she received that she had made positive impacts in every market her company entered. “That’s why I got up every morning and went into work, and why I continue to work today,” she said.

The donor explained that, until this visit, she never really knew whether her gifts were helping or not. She never really knew if anyone was grateful for what she had done. The donor followed with, “Now that I know I can make a difference, I want to talk about how I can continue my support.”

In that simple conversation, that donor changed the course of my friend’s career and taught him two valuable lessons: First, it is critical to provide timely and repeated thanks, along with extensive stewardship for all gifts. Second, never take a gift of any size for granted.

As development professionals, it is critical that we go the extra mile to say thank you. It’s not just sending the letter, but also what you include in the letter that may be important to the donor. Not all donors want to see bills, but many appreciate a thank-you package with confirmation of their expenses. So, why not share those numbers?

The cycle of philanthropy begins and ends with stewardship and saying thank you. If you find yourself saying thank you to a donor five to 10 times—and you don’t see a change in what they do—then you should make a change. Thoughtfully review your stewardship and thank-you interactions with the donor. Ask yourself, have we done everything we could? Have we thanked them in a way that is meaningful to the donor as an individual? Have we really said “thank you” enough times or in the correct manner for the donor? Are there other opportunities for further engagement?

I don’t think I am telling you anything new. We have all thought about this, but, for whatever reason, we’ve hesitated to do it. Why not make a small change in your behavior and be seen as unique to your donors? Repeatedly thanking donors will cause them to think, “They appreciate my gifts, and I am making an important contribution. They use my money as I want it used.”

You already know the keys to fundraising are gratitude and stewardship, so treat your donors’ money like it’s your own.

Pamela Perkins-Dwyer is the major gifts officer at the Los Angeles Master Chorale, one of the resident companies of the Los Angeles County Performing Arts Center. She serves on the AFP Global Board of Directors and is a former president of AFP Santa Barbara/Ventura County Chapter. She earned a bachelor’s degree at Howard University, and a master’s degree at Boston University. She received a Certificate in Fundraising Management at Indiana University’s Lilly Family School of Philanthropy.