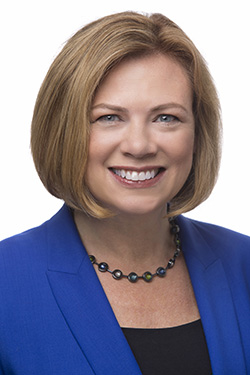 The Outstanding Fundraising Professional award is the highest honor that AFP bestows upon its members, recognizing effective, creative and stimulating leadership, as well as the practice and promotion of ethical fundraising. Croneberger will receive her award on April 15, 2018, at AFP’s International Fundraising Conference in New Orleans, La.

Since 2012, when Croneberger joined SOS Children’s Villages-USA, the organization has almost tripled its annual fundraising revenue for the organization. In 2014, she secured a $3 million capacity-building grant to build a fundraising team and increase brand awareness of the organization. Under her leadership, the team drove significant growth of its child sponsorship program and secured transformation gifts from philanthropists and corporate partners. She has also assembled an impressive and engaged board of directors that has increased its annual minimum gifts and ultimately contributed $250,000 in multi-year pledges.

Croneberger’s work at SOS Children’s Villages-USA is emblematic of her more than 20-year career. She has helped raise hundreds of millions of dollars for organizations such as The Wilderness Society, Reading is Fundamental, the Joe DiMaggio Children’s Hospital Foundation and Memorial Foundation, the American Heart Association of South Florida, and United Way of Broward County, Florida in a variety of executive-level positions. She is known as a strategic leader who has a history of building strong fundraising teams, developing boards and diversifying revenue to achieve maximum impact for organizations.

Throughout her career, Croneberger shown the innate ability to turn around organizations that are struggling or in transition. When she was hired at Reading is Fundamental, the organization was relying heavily on a single grant from the U.S. Department of Education that accounted for more than half of its voluntary contributions. Under her leadership, Reading is Fundamental diversified and substantially increased its fundraising, including growth in corporate revenue by over 400%.

“Driving change is not easy—it requires patience, perseverance and people,” said Croneberger. “I have had the privilege to assemble and lead talented teams to share and shape a vision for what is possible. Over the course of my career, I have been fortunate to draw together committed partners – donors, board members, volunteers and employees – that are inspired to build a better world for future generations.”

Croneberger’s impact is felt beyond just fundraising. She is a leading authority on cause-related marketing campaigns and has presented on this topic. In her current role, she has also become a thought leader and advocate on children’s issues. Most recently, Lynn presented at Families + Social Good Summit hosted by the UN Foundation and Johnson & Johnson as well as the Clinton Global Initiative.

Croneberger is also one of just a handful of members to have received the Outstanding Fundraising Professional Award from two different AFP chapters: the AFP Greater Washington, D.C. Metro Area Chapter and the AFP Florida, Ft. Lauderdale/Broward County Chapter.

Giving back is part of Croneberger’s professional leadership, and she sets an example by spending time mentoring, lecturing and training new and existing fundraisers. She served as president of the Greater Washington, D.C. Metro Area Chapter, and under her leadership, the chapter earned the association’s Charles R. Stephens Award for Excellence in Diversity for outstanding chapter programming and training in diversity and inclusion. She has also recently provided a leadership gift to SOS Children’s Villages, in addition to sponsoring numerous children around the world, and is a long-time supporter of the AFP Foundation for Philanthropy.

“Lynn Croneberger is the epitome of an extraordinary professional fundraiser—not just someone who raises a lot of money, but a professional who raises funds in the right way, bringing people together and inspiring them to believe in the cause,” said Mike Geiger, president and CEO of AFP. “Her ability to lead organizations that are being challenged or in transition speaks for itself, and her dedication to the profession is obvious in how she gives back in so many ways. All of us at AFP are proud to call her our Outstanding Fundraising Professional for 2018 and look forward to honoring her in New Orleans.”