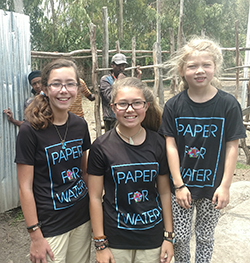 Isabelle, Katherine and Trinity Adams—sisters from Dallas, Texas, aged 14, 12 and 8, respectively, and who have raised more than $1.5 million to provide clean water to children in developing countries—have been named the 2018 CARTER Outstanding Youth in Philanthropy, Group, by the Association of Fundraising Professionals (AFP).

The CARTER Award for Outstanding Youth in Philanthropy honors young people with a proven record of exceptional generosity who demonstrate outstanding civic and charitable responsibility and whose philanthropy encourages others to engage on a community, national and/or international level.

Isabelle and Katherine began the project because they wanted to help other girls in countries who didn’t get to go to school because they have to spend their days hauling unclean water into their communities. With their father having taught them origami, and with many origami pieces piling up around the house, the girls decided to sell them to raise funds to build a water well in Ethiopia.

The girls’ original goal was modest—raise just $500—but the origami ornaments sold out in just one night. After two months, the sisters had raised over $10,000, and they’ve never looked back, continuing to use origami to generate funds and awareness for clean water education and funding.

Isabelle and Katherine are co-presidents of Paper For Water, which was formed in 2011, and Trinity, their youngest sister, joined recently as director of marketing. The sisters have dedicated more than 4,000 hours of their time to supporting the organization. They have raised over $1.5 million and completed over 160 water projects in 15 countries, including the United States. They have also spoken to thousands of people to increase awareness of water poverty issues around the world.

Over 48,000 individuals now have access to clean water due to the efforts of the three sisters. In those communities now with access to clean water, the infant mortality rate has decreased and in places with Ebola, the disease’s transmission rate has also decreased due to the health and sanitation training that is implemented prior to well placement. Thousands of children are now going to school—and playing like children should—instead of hauling water, and adults too now have more productive hours to grow food, start businesses and other activities.

In 2013, the sisters had the opportunity to travel to India and visit communities where there were projects that Paper For Water had funded.  Isabelle and Katherine met school children whose attendance was greatly improved because they were no longer sick from unclean water.  This opportunity inspired Paper For Water to continue their mission. “Before we went to India, we were helping kids half way around the world who we didn’t know,” said Katherine. “Now we’re helping our FRIENDS.”

The 2013 trip and several other short trips inspired their eight-month trip around the world in 2017. The girls visited projects in South America and Africa and had the opportunity to go to some amazingly remote locations where the indigenous residents had never seen a white person.  Despite there being over 14,000 NGO’s working on the world water crisis, there is still immense need. “We got to see that it’s not just access to clean water, but sanitation and access to bathrooms that can have immense impact on the health of a community,” said Isabelle.

“It’s remarkable to think these three incredible sisters have already made such a profound impact on our world—and have touched so many lives—at such an early age,” said Steve Higgins, CFRE, president of Carter, a consulting firm that helps nonprofits across the globe maximize their philanthropic potential. “These young adults prove that it doesn’t matter how old you are, your skill set, or how much money you have. We can all make a difference if we put our minds to it. Our Carter team members are excited to help highlight philanthropy’s bright future with this well-deserved recognition for Isabelle, Katherine and Trinity.”

More information about Paper For Water can be obtained by going to its website: www.paperforwater.org.

Carter is a consulting firm dedicated to advancing philanthropy worldwide through counsel in the areas of fundraising, organizational planning and governance. With 27 senior-level consultants living throughout the United States and Mexico, the Carter team has over 300 years of combined experience in the arts, conservation, healthcare, education, human services, humanitarian aid and international sectors. Carter’s depth of experience allows each consulting team to be strategically selected based on the unique needs of its nonprofit partners. Carter consultants have assisted hundreds of organizations of all sizes, ranging from regional nonprofit agencies and national associations to institutions of higher education and international causes. For more information visit www.carter.global.