Falling Into Fundraising: A Natural Fit

In this new series “Falling Into Fundraising” Danisha Bhaloo-Shivji, manager of development and communications at the Boys & Girls Clubs Big Brothers Big Sisters of Edmonton & Area will interview women who are Black, Indigenous, or persons of color to talk about their “unintentional” careers as fundraisers, what we can do to showcase the profession as a viable, intentional career choice, and how to increase the number of BIPOC women in the profession. 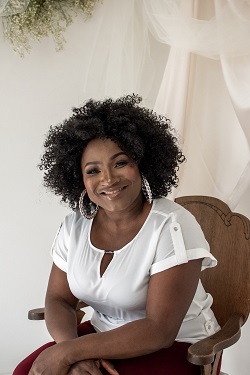 In this interview, Imoleayo (Ayo) Adeyeri talks about how she “fell into” fundraising, the benefits of mentorship, and the dynamics of power and privilege in the donor-fundraiser relationship.

How did you “fall in” fundraising as a career?
Borne out of necessity, I transitioned into fundraising after seven years of work experience as a program manager. Until 2015, when I relocated to the U.S. from Nigeria, developmental programs and projects were funded mainly by international donors and agencies. The leadership of the organization I worked with at the time became curious about cultivating indigenous donors and corporations to support nonprofit work. Based on my experience managing and fulfilling grant requirements, I became a natural fit to lead that process.

We created an employee giving program to raise unrestricted funds because the grants were restricted. The funds lubricated the process of fundraising, and we built relationships with high-net-worth individuals and corporations in the country, maximizing the corporate social responsibility provisions.

I became more curious and searched for formal training on how to raise funds. Fortunately, I discovered Indiana University Lilly Family School of Philanthropy and submitted my application. The program was perfect because it allowed students to gain hands-on experience in a nonprofit organization while studying. While I was in Nigeria, I interviewed with the American Red Cross National Headquarters in DC and secured my graduate assistantship before securing my visa.

During my studies, I supported the corporate and foundation Programs. There, I developed the American Red Cross ‘foundation-specific’ emergency and disaster relief solicitation resources, used by 350 American Red Cross relationship managers to increase foundation revenues by 25%. My fundraising journey started in North America, and I have worked in different capacities with several great organizations, such as the American Diabetes Association, Lumina Foundation, Compassion House Foundation and Alberta AdaptAbilities Association.

What role did mentorship play for you as a Black woman in fundraising?
I have always been an advocate of mentoring. It makes the journey easier. I have had mentors at different stages of my professional life, and the experiences have been nothing short of valuable. I learn from their wealth of experiences, tap into their network and resources, and learn from their mistakes. Indirectly, I learn from everyone around me and won’t wait to ascribe titles to anyone before I see value in the relationship. However, I have not seen a lot of Black, Indigenous, or people of color (BIPOC) mentors in the profession in Canada.

What were some of the challenges you’ve faced in your career?
As an immigrant, it was difficult to settle quickly, acclimatize and find the perfect fundraising development job. I lived in the U.S. from 2015-2017, with occasional trips to Canada to visit my spouse, and then I moved to Canada in 2018 as a permanent resident, where I currently reside. There is always the snag of the Canadian experience hanging over you whenever you interview for a role. Despite my extensive experience working in the nonprofit sector in Africa and with my graduate school research on the nonprofit-governmental financial relationship in Canada, it was still a major challenge. There are many layers of subtle racism and microaggression in the country—from not bearing white or English-sounding names to dealing with recruitment gatekeepers.

On the job, you mostly work with people who look different from you. I was in a conference where I was the only person of color, and this was supposed to be a regional conference. I have met donors who preferred I had a different identity, and I have been asked to leave a job without adequate explanation for the layoff. It’s been a rollercoaster practicing fundraising as a BIPOC in Canada.

What role do power and privilege play between fundraisers and donors?
We talk so much about donor-centric fundraising in the profession, but donors can’t always be right. As much as I enjoy donor relations, we should not cede power to our donors. It is useful to understand the donor’s intent, but it should be within the confines of the mission and goals of the nonprofit organization. It is easy to experience mission drift if we rely heavily on the donor’s interest. We cannot, on the whole, separate the issues of power and privilege, which puts the fundraiser in a weak position, because of system issues, such as racism and ableism in our structures and institutions.

What is your hope for future BIPOC women who are considering a career in fundraising?
I hope that they will be treated fairly and equitably regardless of color, race, or identity. I hope they will be valued, listened to, and protected like their white colleagues. I hope they will have a clear path to leadership within their chosen organization.

Imoleayo (Ayo) Adeyeri is a nonprofit professional with 15 years of work experience in program management and fund development. She’s helped nonprofit organizations raise funds and implemented nonprofit programs in Africa, the United States and Canada. Ayo became a resident of Canada in 2018 and joined Compassion House Foundation, an organization that provides accommodation to women undergoing cancer treatment, as the first director of philanthropy in its 23-year history. Ayo is a member of the Association of Fundraising Professionals (AFP) Global IDEA committee and grades national scholarship applications for the AFP Foundation for Philanthropy – Canada. She recently became an awardee of the Alford Group Mentoring and Leadership Development Program. Ayo received a Master of Arts degree in Philanthropy from Indiana University Lilly Family School of Philanthropy, Masters of Science degree in Finance from University of Leicester, United Kingdom, and Bachelors in Accounting and Management from Ladoke Akintola University of Technology in Nigeria.

Danisha is a Certified Fund Raising Executive and works as the development and communications manager with Boys & Girls Clubs Big Brothers Big Sisters of Edmonton. In a volunteer capacity, Danisha is the chairperson of the Social Wellbeing Advisory Committee for the City of Calgary, a member of the Women's Impact Council for the Association of Fundraising Professionals (Global), and is a board member for United Way Centraide Canada. She also sits on the local United Way of Calgary’s Leader’s Cabinet and is the co-chair of Women United with United Way of Alberta Capital Region. Danisha has been recognized for her contributions to the community by Future of Good as one of their 21 Young Impact Leaders, the Government of Alberta Stars of Alberta Award, University of Alberta Alumni Award, Avenue Magazine Edmonton’s Top 40 under 40, Edmontonians' Magazine’s Sizzling 20 under 30, and Correctional Services of Canada.