OK, the Year Ended. Now What? New Insights from the FEP 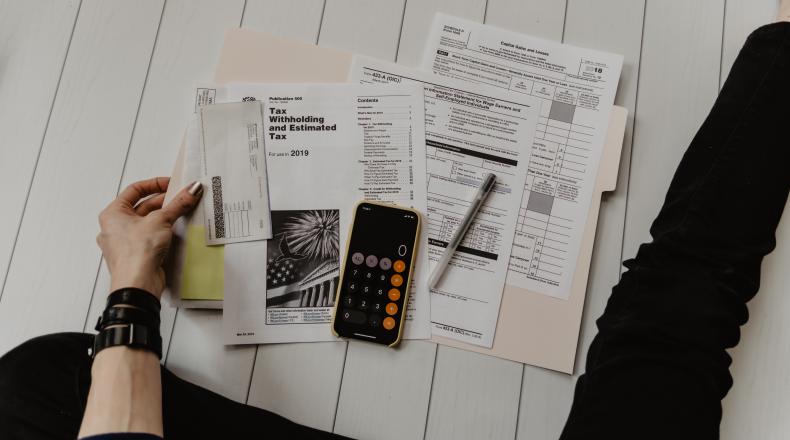 The Fundraising Effectiveness Project (FEP) is a collaboration among fundraising data providers, researchers, analysts, associations, and consultants to empower the sector to track and evaluate trends in giving. The project offers one of the only views of the current year’s fundraising data in aggregate to provide the most recent trends for guiding nonprofit fundraising and donor engagement. The FEP is administered by the Association of Fundraising Professionals (AFP) Foundation for Philanthropy in collaboration with GivingTuesday.

The end of the year is the most important time for fundraising, so much so that we have dubbed it “The Giving Season.”

Just over 30% of new donors give their first gift in November or December. If that factoid sounds important in and of itself (it is!), it takes on even greater meaning when you consider that because donor retention levels are so low, most charities need four times as many new donors as reactivated donors just to maintain their current levels of donors.

Suffice to say, The Giving Season is paramount to a nonprofit’s long-term growth and success.

However, there is a preconception that these year-end donors have different motivations than their counterparts. We tend to think because these donors give at the end of the year, they are probably more motivated by tax deductions or got inspired to give because of Giving Tuesday, as opposed to a strong belief in and support of a particular cause.

At the Fundraising Effectiveness Project, we wanted to know if this thinking was true, so we decided to find out. What we found may surprise you.

When Donors Make Their First Gift
Let’s start with when donors give. The chart below shows the timing of when donors made their first gift to a charity. Roughly 30% of donors gave their first gift to a charity in the final two months of the year—about double the percentage you’d expect if giving was equally spread out during each month of the year.

Of course, this is nothing new. We know that giving increases dramatically at the end of the year. Whether it is because nonprofit organizations concentrate much of their acquisition efforts at year-end, or if donors are in a giving spirit during the holidays, this time of year is a saturated period for giving.

The Value of Year-End Donors
But then the data gets more interesting. We discovered that donors who give on the last day of the year have a lifetime value 15% higher than the average donor. We also found that donors whose first gift was in November or December have a retention rate that is 53% higher than those making their first gift in the period of January through October.

Is that what you expected? We tend to assume that these year-end donors, especially those who gave at the end of the year, are more “last-minute” supporters who might not be the strongest supporters overall. Yet, they have a higher lifetime value and a higher retention rate.

And as the chart below shows, donors who give in November and December are not necessarily less motivated by the organization’s mission, are not just giving at year-end for tax purposes and/or are not making a quick, scatter-shot gift. Over 40% of these donors gave a second gift to a charity, compared to just 26% of January-to-October donors who gave a second gift. 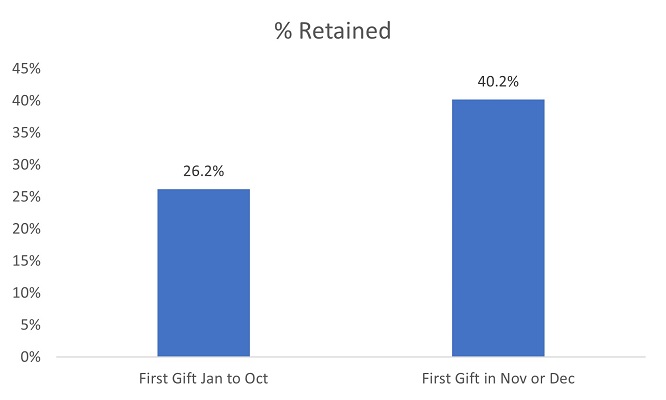 And here’s one more factoid about the importance of the late-in-the-year donors: One out of every 10 year-end donors made a second gift within the first two months of the date they made their first gift!

Second Gift Conversion Rates
There’s definitely a lot of data that points to the value of year-end donors. But our data so far is simply a snapshot in time. But what about long-term? Is focusing on donors who gave their first gift at year-end really worth it, or does giving balance out in the end, no matter when the first gift was made?

So, the chart below is a little complex but bear with me. It shows a blended average of donor retention for the years 2016 (roughly 60 months ago) to present for donors who gave in the January through October timeframe (in blue) and donors who gave in November and December (in orange). 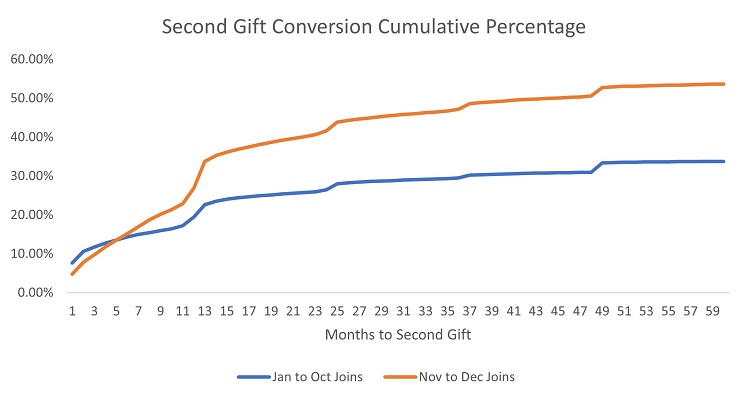 While the second gift conversation rate is roughly the same at the beginning, after one year, there is a clear divergence between the two groups as donors who joined in November and December start to retain at a much higher rate.

The overall retention rate also bumps up on the anniversary of the first gift (roughly every 11 – 13 months), but the strongest divergence occurs within the first 12 months. More study needs to be made to fully understand what is going on here, but the difference is dramatic.

Conclusion
There are lots of lessons here. We don’t necessarily have to wait awhile until we ask for a second gift. In some cases, donors get so energized about making their first gift to a cause that they want to give again and again, and how much time has elapsed doesn’t matter so much.

Also, don’t give up on donors after a year. The retention of donors is potentially much higher than we ever thought.

And finally, there is something to the value of donors who give in November and December, whether it’s timing, the focus charities put on giving at the end of the year, or a combination of these and other factors. They are more valuable than we ever imagined!

The Growth in Giving database is the world’s largest public record of donation activity, with more than 204 million donation transactions, and is continuously updated by leading fundraising software thought leaders (in alphabetical order) Bloomerang, DonorPerfect, Keela, and NeonCRM. Additional partners include the 7th Day Adventists, The Biedermann Group, DataLake Nonprofit Research, and DonorTrends (a division of EveryAction). For more information and how you or your fundraising software provider can participate, please visit http://afpglobal.org/fep.

Benjamin Miller is a consummate entrepreneur drawing upon degrees in mathematics and systems engineering to advance applied data science in the nonprofit sector. Ben is the chief analytic officer at DonorTrends, a division of EveryAction, and has helped raise billions of dollars from tens of millions of donors for thousands of organizations over his career. Ben also serves on the AFP Research Council and is the chair of the working group for the Fundraising Effectiveness Project of the Growth in Giving Initiative.