AFP Testifies Before Canada Senate Committee on the Charitable Sector 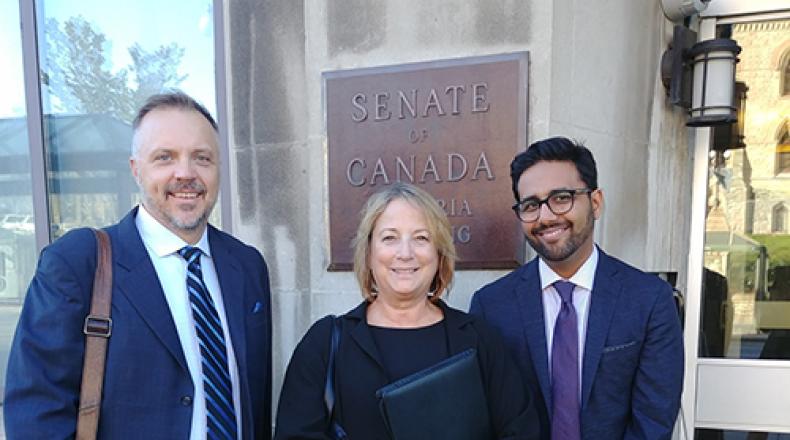 Scott Decksheimer, CFRE, chair of the AFP Canada Board, and Andrea McManus, CFRE, past chair of AFP International, appeared before the Senate Special Committee on the Charitable Sector on Monday, Sept. 17, to discuss ways to increase giving and public awareness about philanthropy.

The Special Senate Committee on the Charitable Sector was established in January 2018 to examine the impact of federal, provincial, and territorial laws and policies governing charities and their effect on the charitable sector in Canada.

Committee members, led by Senator Terry Mercer (Lib., Nova Scotia - Northend Halifax), will study how Canada can improve the regulation of charities and nonprofit organizations, and help them overcome challenges that include, among others, funding gaps, staff and volunteer retention challenges and changing demographics and technologies, through innovation and other best practices, among other important themes.

In their comments, Decksheimer and McManus called on government to work together with the sector to “encourage more people to engage and give, and that means providing additional options to give, and to educate them about the importance of giving.”

Noting that Imagine Canada was forecasting a deficit in charitable sector funding of $25 billion by 2026, AFP urged committee members to look at fundraising in helping to fill that gap. Several proposals and ideas were proposed, including:

Equally important is the government’s approach, tone and visible and audible support of fundraising and the charitable sector. “When that support is lacking,” said Decksheimer, “donors withdraw, or change giving habits, which destabilizes care and support for issues important to Canadians.”

McManus pointed out the Canada is the only country in the world that officially recognizes National Philanthropy Day, which sends a strong message to charities and the public. She suggested the government send an even stronger message to the sector by designation a federal department—the Ministry of Innovation, Science and Economic Development—to have economic policy responsibility for charities and nonprofits to recognize the value of this sector beyond the tax regulation of Canada Revenue Agency.

In response to questions from the Committee, Decksheimer and McManus also addressed the regulatory scheme under the Canada Revenue Agency, different types of giving incentives, building public trust in the sector and learning from diverse philanthropic cultures and bringing in new ideas into the Canadian philanthropic landscape.

Also appearing before the Committee was Krishan Mehta, Ph.D., CFRE, president of the Greater Toronto Chapter, who was representing himself and discussed the importance of immigrants to Canadian philanthropy. “Successive waves of mass migration over the last 170 years have made Canada one of the most diverse countries in the world, as we all know,” said Mehta. “For immigrant philanthropists, this provides new opportunities to sit at the head table of various institutions — tables where they may have been excluded or that were reserved for majority populations. In essence, diaspora philanthropy — immigrant philanthropy — supports the reframing of the immigrant from beneficiary to benefactor, and supports a broader narrative about Canada as a land of great, incredible opportunity.”

Decksheimer’s and McManus’ comments can be found attached below. In addition, you can find a video of their presentation, along with Mehta’s presentation, at the AFP Canada Facebook page: https://www.facebook.com/AFPCanadaFan/

Showing Our (Professional Development) Appreciation to You