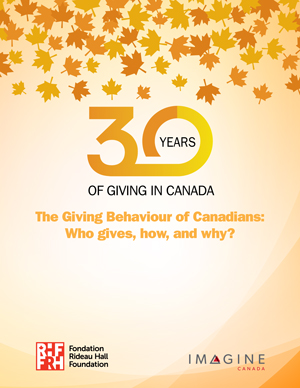 Thirty Years of Giving in Canada offers an in-depth look at the giving behaviour of Canadians – who gives, how and why – and examines how these trends are re-shaping the future of philanthropy in Canada.

The report reveals a philanthropic environment filled with demographic challenges and high-potential opportunities, including:

How generous are Canadians?

The study estimates that individual Canadians gave approximately $14.3 billion in receipted and unreceipted donations to registered charities in 2014. Claimed donations have increased 150% in real terms since 1985. However, the proportion of tax filers claiming donations has been falling steadily since 1990, which means charities are relying on an ever-smaller proportion of the population for donations. Total donations have continued to rise only because those who give are giving more. Recent research comparing levels of charitable giving in several countries found that Canada has the third highest level of giving, following the United States and New Zealand (Charities Aid Foundation, 2016).

What causes do Canadians support?

Canadians support charities working in a wide variety of areas. However, more than three-quarters of all donated dollars go to the “big four” causes: Religion, Health, Social Services and International. Giving to religious organizations is decreasing, but still accounts for the largest portion of donations. Large proportions of the population give to health and social services organizations, but the amounts given are low compared to religion. Giving to international causes is increasing, both in terms of the amounts donated and the number of Canadians donating.

What are the trends relating to gender and income?

Charities have always relied heavily on donations from those who are in the best position, financially, to give. Historically, this meant that wealthy males dominated the donor pool. There is evidence this has changed somewhat over the past thirty years.

Men continue to be more likely to claim donations and to donate more, but women now represent a larger percentage of the donor pool and a greater proportion of the money donated than they did in the 1980s. Over the same period, however, Canadian charities have become more dependent on affluent Canadians. In 1985, the top 1% of tax filers (then earning $80,000 and up) accounted for only 16% of donations. In 2014, the top 1% (those earning $250,000 and up) accounted for 31% of donations.

What are the regional trends?

Since the 1980s, residents of Ontario and the Prairies have been the most likely to claim donations. The largest average donations, however, have come from Alberta and British Columbia. Average donations are lowest in Quebec and Atlantic Canada. Since 1985, total donations have increased the most in Alberta and British Columbia and least in Atlantic Canada and the Prairies.

Despite the unquestionable generosity of Canadians, much could be done to increase giving in this country.