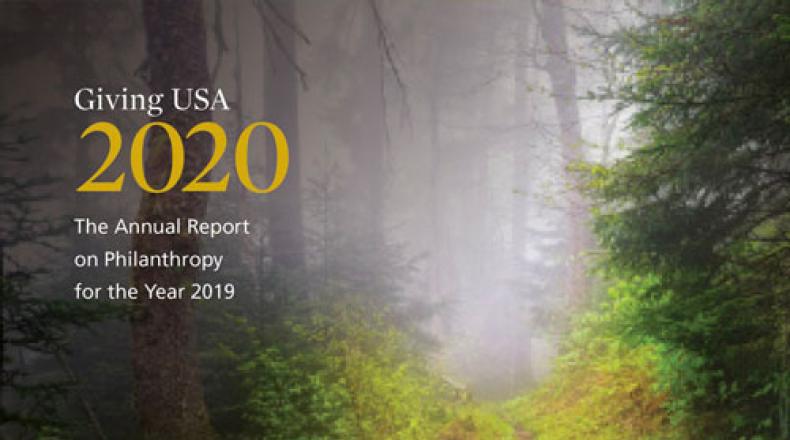 Individuals, bequests, foundations and corporations gave an estimated $449.64 billion to U.S. charities in 2019, according to Giving USA 2020: The Annual Report on Philanthropy for the Year 2019, released today.

Total charitable giving rose 4.2% measured in current dollars (2.4% adjusted for inflation) over the revised total of $431.43 billion contributed in 2018. Measured in current dollars, giving in 2019 reached the highest dollar total to date. Adjusted for inflation, total giving reached the second-highest level on record, just slightly below the all-time high dollar amount achieved in 2017.

“The solid growth of giving in 2019 brought total giving close to the record level set in 2017, which means that the past three years are the three highest years on record. Clearly, Americans prioritize generosity as a key part of their lives,” said Rick Dunham, chair of Giving USA Foundation and founder and CEO of Dunham + Company. “Giving increased substantially in 2019, ending the decade on a high note. While it’s too soon to tell what that will mean in the uncharted territory we all find ourselves in today, these estimates provide an important baseline for understanding where giving stood at the outset of the current crisis.”

Positive economic conditions resulted in growth in giving from three out of the four sources. Economic growth also led to increases in giving to all but one of the nine major types of recipient charitable organizations. Six of nine of these charitable subsectors reached their highest ever totals in 2019, adjusted for inflation.

“In 2019, the growth in total giving was driven by an increase in giving by individuals, which remains by far the biggest source of giving. Interestingly, in recent years we’ve seen a consistent and growing trend in giving by foundations comprising a larger share of total giving than it did 15 years ago,” said Amir Pasic, Ph.D., the Eugene R. Tempel Dean of the Lilly Family School of Philanthropy. “This change may reflect larger trends such as in the distribution of wealth and in asset growth across a decade of stock market expansion.”

The overall U.S. economy was relatively strong in 2019, lifted by the robust performance of many of the economic factors that affect giving, such as a 28.9% increase in the S&P 500 and 4.1% growth in the GDP, both in current dollars. Giving by individuals and giving by corporations were buoyed by the growth in the stock market. Giving by foundations also grew, but at a slightly lower rate.

“Donors’ giving patterns evolve in response to changes in economic and social forces. In 2019, we saw solid, broad-based growth in almost all aspects of charitable giving, and especially in giving by individuals due to strong growth in the S&P 500 and personal income,” said Una Osili, Ph.D., associate dean for research and international programs at the Lilly Family School of Philanthropy. “While giving trends vary by donors’ income and wealth, since the Great Recession, we have seen giving become more concentrated toward the top end of the income and wealth spectrum. We will continue to monitor how current events affect giving patterns.”

“Giving to education, to arts, culture and humanities organizations, to public-society benefit organizations, and environment and animal organizations all saw double-digit growth in 2019, even when adjusted for inflation,” said Patrick M. Rooney, Ph.D., executive associate dean for academic programs at the Lilly Family School of Philanthropy. “The 2019 results for recipient organizations are in line with the trends we have seen over time. Generally speaking, when there is broad-based economic growth, it is reflected in increased giving to all of the various subsectors; however, giving to religion is usually the least affected by economic shifts.”

Giving to individuals, which is 2% of total giving, is estimated to have increased 2.2% (0.4% in inflation-adjusted dollars) in 2019, to $10.11 billion. The bulk of these donations are in-kind gifts of medications to patients in need, made through the patient assistance programs of pharmaceutical companies’ operating foundations.

Giving USA is published by Giving USA Foundation, a public service initiative of The Giving Institute. It is researched and written by the Indiana University Lilly Family School of Philanthropy at IUPUI.

Key findings, data tables and more from Giving USA 2020: The Annual Report on Philanthropy for the Year 2019 are available for download at www.givingusa.org. The full Annual Report will be available in July 2020.