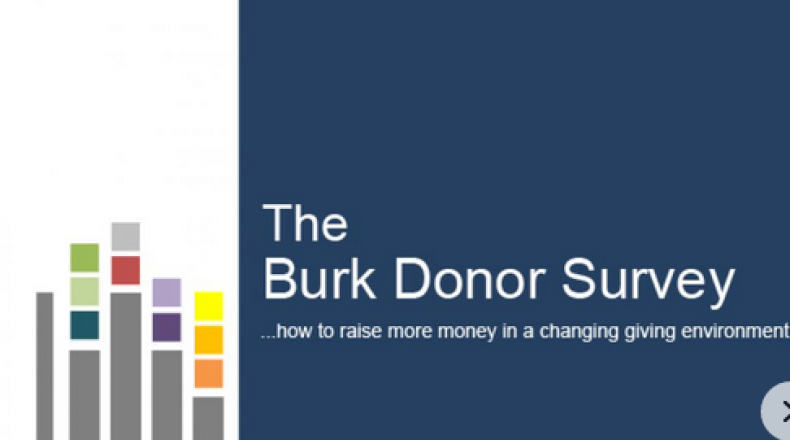 Donors now prefer online giving as much as they enjoy direct mail, and at least half of donors who have included a charity in their will have not told the nonprofit beneficiary about the gift, according to the ninth annual Burk Donor Survey…How to Raise More Money in a Changing Environment.

The survey studies Americans’ philanthropy and, specifically, how fundraising practices and beliefs affect the financial wellbeing of nonprofit organizations. The results of the survey were generated through an online, anonymous survey responded to by almost 20,000 donors.

From the executive summary of the report, 53% of donors said they gave more money to charitable causes in 2017 than in 2016, while 38% gave approximately the same amount, and 8% gave less. These figures, which all improved over the year before, coincide with what other studies have found, which is that giving was up considerably in 2017 over 2016 and, in fact, reached an all-time high.

The Survey’s youngest donors were more likely to have increased their giving in 2017 (73%) compared with either middle-aged donors (54%) or donors over the age of 64 (48%), though giving was up among all donors, regardless of age. However, the average annual gift value of donors under the age of 35 was significantly less at $1,600 than either middle-age ($7,400) or senior donors ($11,000). That said, as a percentage of giving by their older counterparts, young people’s giving has been rising steadily over the years.

For the first time, giving online was as popular as giving via direct mail (48%). While giving via direct mail has declined in the last three years, online giving is up from 29%. But, when age is taken into account, there are substantial differences in giving preferences. 59% of the Survey’s oldest donors but only 22% of those under the age of 35 responded to direct mail appeals in 2017.

Including those who gave to relief agencies or directly to someone in need, 59% of Respondents made at least one disaster relief gift in 2017; 40% did not give. According to donors who gave more in 2017 than in 2016, the number and intensity of disasters last year was one of the top three reasons for their increased generosity.

The media was primarily responsible for motivating respondents to give (62%), while relief agencies themselves were far less influential (13%).

There is significant room for improvement in post-gift communications, starting with acknowledgment letters. Only 61% reported receiving a thank you letter after giving. Post-gift communications also fell short; only 12% of donors who made relief gifts received anything other than more appeals or information about the disaster that was readily available through mainstream media reports.

How to Better Engage Donors

Among respondents planning to give the same this year as last, 63% said they are financially able to maintain but not grow their philanthropy. However, almost one in three (31%) of these donors also said they could be persuaded to give more generously if a not-for-profit establishes a case for extraordinary need. Selling the brand or the organization as a whole will not motivate these stay-the-course donors to give more. Restricted appeals for a program, project, or area of focus that is specific and measurable are essential.

Other ways in which fundraisers can inspire some donors who were planning to give the same or less in 2018 to actually increase their giving instead include eliminating fundraising practices that donors find irritating such as oversolicitation and sending donors premiums or token gifts. The latter demonstrate to donors that not-for-profits did not need all the money they raised. Offering matching gift opportunities are also a popular way to increase support as is “being asked to give by someone I respect”.

Respondents to the survey included 7,700 donors with a will, one third of whom have included a gift to one or more not-for-profits in their wills. Among this group, more than half have not disclosed the gift to their nonprofit beneficiaries!

The survey also found that the planned giving field is under-resourced, with only 18% of bequest donors having a planned gift officer. The majority of donors with a gifts officer rate them as effective stewards who help them choose the best gift configuration and reinforce their giving decisions over the long term.

Respondents said they would be comfortable with a planned gifts officer under the age of thirty, an important finding which would help grow the number of practitioners while addressing the rapid rate of turnover among young fundraisers.

More than one million American donors were invited to participate anonymously in an online survey consisting of 129 questions from March 19 through May 18. The response rate was 1.8%, representing 19,535 donors, and 63% of those respondents, or 12,232 donors, completed the entire survey.

To receive a free executive summary or to order the full 2018 Burk Donor Survey, go to: https://cygresearch.com/product/the-2018-burk-donor-survey-report/.